Home News and Editorial Toshiba unveils pricing for AT200 10″ Tablet 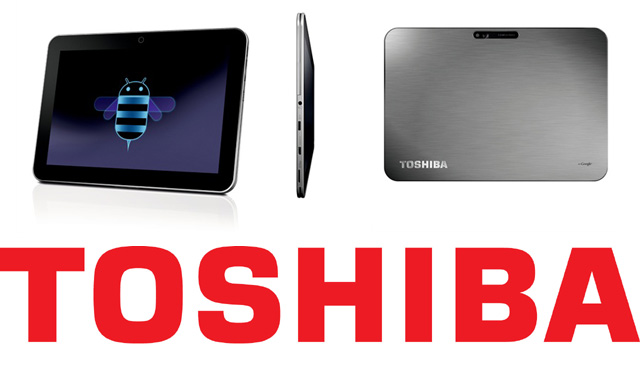 Toshiba has today released pricing and availability information for the AT200 which we first heard about back in September last year when it was announced at IFA in Germany. The 10″ AT200 is one of the thinnest and lightest tablets to be released at just 7.7mm thin and weighing only 558g, it will sell at $579. Toshiba advised the tablet will be available in early February and given the reach Toshiba laptops have in retail stores I imagine it will be pretty easy to lay your hands on the AT200, the specs appear to be fairly decent :

It is a bit of a shame that they are shipping the tablet with Honeycomb, however The Verge advises that they have spoken with Toshiba and it will get Ice Cream Sandwich, but no time frame has been given. This is a much better looking tablet than the original Thrive which was a fairly hefty tablet even if it did have a full size USB port. Pricing wise it’s a little high in my opinion but it is a Toshiba so build quality should be pretty good, guess we`ll have to see if we can lay our hands on one for a test drive when it comes out.
Source: ToshibaTheVerge.

How this comparable to the current dual and quad core chips that is currently in the current and next generation tablets?

Sorry I meant to add how does this TI OMAP™ 4430 compare to the current dual and quad core chips?

They dropped the ball on this one. They announced this months ago, and it had me frothing… then all went quiet. The tab 10.1 was stuck in court rooms, so they had the window of opportunity, now its pointless as the prime is available and dual core sounds old hat.

I dont understand why people dont think all tgis techonology isnt worth the given price. i think its reasonable. if it was suggested lower stores woukdnt sock it. and its a give in that stores will do 15 percent off as my store regularly doea so under 500 is reasonable then ?