The Sony Tablet S is more than just the typical rectangle slab of tablet which is all too commonly seen lined up at your favourite electronics retailer. The unique ‘wedge’ shape of the Sony Tablet S sets it apart from its competitors, as do a number of its other features. The Sony Tablet S was the highest selling Android tablet for October in the UK with 26 percent of the market, a surprising result considering the press attention the Galaxy Tab has garnered – we took a look at why the Tablet S is so popular. When I first saw a picture of the Tablet S on Engadget prior to its release I wondered what Sony were thinking, I didn’t like the design at all. We’ve been convinced by other manufacturers that a tablet is a square or rectangle slab of metal or glass, with maybe a rounded or sharp corner to differentiate from its competitors. Sony’s design of the Tablet S appeals not just for aesthetic reasons, but makes a lot of sense from a usability perspective. The design resembles a ‘wedge’ or a bundle of A3 papers folded over backwards. The front of the fold is black and the rear is silver, the unit is made from plastic but does not feel cheap.

Up front is the 9.4” 1280×800 resolution TFT screen with a 0.3MP camera at the top centre. The glass front seamlessly transitions to the black plastic rear which is textured for grip and has 2 rubber feet to protect it when placed on a flat surface. The wedge shape of the tablet where it is thicker at the top means the screen is slightly angled up towards the user when on a table which is perfect for typing. It also means a case is not absolutely necessary as it is with most other tablets, the Tablet S is comfortable, even natural to hold and use without one.

On the left hand side is the 3.5mm headphone jack, and behind a protector is the microUSB port and full size SD card slot. SD cards are generally cheaper than microSD cards, great news if you want to expand the Tablet’s storage capacity. On the right hand side is the power, volume and a recessed reset button which hopefully doesn’t need to be used.

The style and the shape of the Tablet S are very comfortable to use and their unusual design has definitely paid off. I found myself using the Tablet in portrait mode most often since it made sense to hold the tablet one handed on the rounded edge. Overall i was very happy with the build quality and natural and comfortable feel of the Tablet when using it.

The display is slightly smaller than other tablets around this size and price, with Sony opting for 9.4” rather than 10” or 10.1”. Even though the physical size is a little smaller the resolution is the same at 1280×800 giving it a higher pixel density at 161ppi. You’d expect Sony to have a high quality screen, and while it does look good it didn’t totally blow me away. It is a TFT screen with ‘TruBlack’ technology, definitely better than average but not breathtaking.

Visibility outside on a sunny day is readable but only just. I did find the screen to be a fingerprint magnet and had to keep cleaning it, lucky I carry around a microfiber cloth. The screen is very responsive to touch and I had no problems with typing or general use.

The Sony Tablet S uses an NVIDIA Tegra 2 T20 with 1GB of ram, a configuration found in the majority of current generation tablets such as the Galaxy Tab 10.1, Iconia A500 and the Transformer just to name a few. Performance was great with no lag while playing music, movies or web browsing. The Tablet S is available with 16GB or 32GB onboard storage, expandable by another 32GB with an SD card. We reviewed the 16GB Tablet and of the total 4GB was set aside for app data, 3GB for the system and 9GB was available to the user for media. 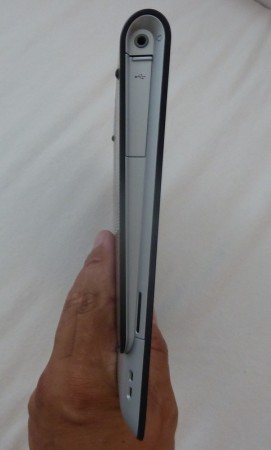 Battery life is always hard to comment on because a person’s individual usage pattern is the main factor determining battery life. The Tablet S has a 5,000mAh battery, smaller than the Galaxy Tab’s 7,000mAh and larger than the Iconia A500’s 3,260mAh battery. I found battery life to be good even on maximum brightness, but your mileage may vary.

The Tablet S currently runs Honeycomb, Android 3.2.1, with an official upgrade to Ice Cream Sandwich promised for the US Spring which is sometime between March and May for the rest of us. The interface is lightly skinned and actually adds some useful features such as a shortcut bar at the top of the homescreen and a redesigned app drawer.

Video codec support is rather limited out of the box. The default media player works with MP4 which is great if you’re buying movies via the included Video Unlimited service, but most users will find the need to play other more popular formats. The default player does not work with AVI or MKV files, but third party players from the Market such as Moboplayer and Dice Player will do the job. I tested Dice Player and it handled a 720p MKV no worries, both locally and streamed from a server. It did not handle 1080p but this is due to the limitations of the Tegra2 chipset rather than anything specific to this tablet.

The infrared port allows you to use the Tablet as a universal remote for your TV, surround sound etc, and it’s not restricted to Sony products. I was able to set up the Tablet to control my Samsung TV within a few minutes using the app wizard which has a database of manufacturers and remote control combinations. If your product can’t be found the Tablet can learn the controls from an existing remote, very handy and cements the Tablet’s place in the lounge room.

Due to Sony’s presence in the Music and Movie industries they are in a position to offer content via their Music Unlimited and Video Unlimited services. Music Unlimited is a subscription service offering over 10 million songs available from the Tablet and other supported devices from $3.99 a month. Video Unlimited is a pay-as-you-go video rental or purchasing service across supported devices starting at $2.99 for SD rentals. This is not something I would use but is a value-added component to the tablet offering legal music and video services.

As a Playstation Certified Device the Tablet has access to the Playstation Store which offers PS1 games, many for free and the remainder at $8.45. The graphics on some of these games have not stood the test of time well, but Driver and Crash Bandicoot are still a lot of fun. I don’t own a PS3 (I have a 360) so I couldn’t test this, but a system update in December last year now allows a DualShock controller to be connected for use with PS1 games, much better than the awkward on screen controls. A USB connector is required for initial setup, but the controller can be used wirelessly thereafter.

One annoying thing about the stock web browser is its tendency to prefer mobile versions of sites rather than the desktop equivalent, with no option to change the user agent to desktop. Other browsers such as Firefox or Dolphin address this. Also, root access has not been achieved yet so there is no custom rom scene to speak of, meaning you are entirely reliant on Sony for updates. Overall the modifications by Sony made to the standard Honeycomb interface have improved the experience and give this tablet another advantage over its competitors.

Initially I dismissed the Sony Tablet S as too expensive, and there’s no question it would be much more attractive if Sony Australia had passed on the price cut it gave its US customers, but at $599 from Mobicity compared to (for example) $549 for the Galaxy Tab 10.1 I’d say it is worth the $50 premium. The unique style sets it apart from any other tablet on the market, and also means you don’t have to pay around $60 straight up for a case to use it. There are many Tegra 2 tablets at a similar price, size and spec to the Tablet S, but none of them offer you all the features of the Tablet S. The Tablet S can be used as a media player, e-book reader, for gaming and as a universal remote, all of which help to justify the price and give the Tablet S a significant advantage over its competitors.

Just bought one and I need a little help. I use a cradle which is truly great – highly recommended. When docked I get the option of a really cool clock function or a slideshow viewer. The native device uses Gallery obviously, but can use others (e.g. QuickPics). What I can’t work out is how to change the images in the slideshow. Can anyone help?

I had a Xoom, until my girlfriend purchased one of these, then I solid it and picked up a Tablet S for myself. Easily the best Android tablet I’ve used and I certainly liked Sony’s customisations over what Samsung did with their Galaxy Tab 10.1,

I think Sony not passing on the price cut is a major reason is not gonna sell well here. I saw it at a booth, nobody bothers to have a look or interest in it

Love my sony tablet s, and think the design is great and makes perfect sense.  My only quibble was the video streaming not working well out of the box, but that was easily fixed.

Sorry about the typos. Typing on an iPad 2… My Tablet S replacement.

Are you serious? I had one of thee and sold it after to weeks. No noticeable lag… Trying loading a few apps at the same time. Gaming is average (there are literally 9 games on the PS Store). The original transformer blows it away, let alone the prime.n

Even the design, which is certainly original, is poor. This thin I massive compared to other vices. Didn’t even fit in my briefcase.

are YOU serious?
PS3 controller sync + emulation = WIN. Who cares about the PS store lol

No mention of how the transformer prime blows it out of the water?

Meh.  I think its design is different just for the sake of being different.

Im amazed… Better than the Galaxy Tab 10.1…. I would like to know how it compares to the galaxy tab 7.7 though… Thumbs up to Sony for beginning to innovate again

The Galaxy Tab 7.7 looks great, it’s likely to be my next personal tablet. We’re also trying to get a review unit so hopefully we can do a review soon

Agree entirely with this review. Been using the sony tablet s for a while now n its awesome. Remote control function is great, sd card slot is very, very convenient, and it feels great in hand without a cover. If you’re worried about scratches, get a screen protector. Simple. Best tablet out there right now.