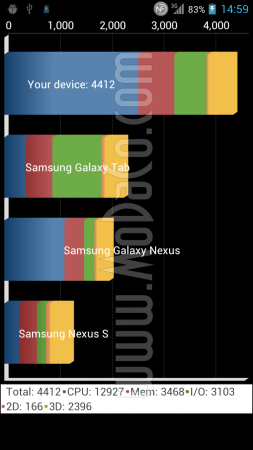 Remember the LG X3? It’s the device LG are going to launch at Mobile World Congress, and it just got a little bit more real this morning with the release of screenshots showing some benchmark results in Quadrant. MoDaCo was lucky enough to score the exclusive shots which give the X3 a score of 4412 on Quadrant — more than double the score of the Galaxy Nexus, which has half the amount of cores. Specs for the LG X3 include:

As we said last time we covered the LG X3: If LG can keep Android as stock as possible, they might be onto a winner, and from the looks of things they just might have pulled it off. This is another device to keep an eye out for come Mobile World Congress.

Quadrant 2.0 supports multi-core benchmarking and the apparently the Galaxy S II dual core can get a score of  4200 compared to LG X3 Tegra3 quad core score of 4400 so not a huge leap even with the benchmark making use of the extra 2 cores.  Interesting to see how Tegra 3 performs in real world conditions instead of benchmarks.

That’s good to know – there is some other benchmark which does normalise for different screen resolutions so I didn’t consider that quadrant hadn’t also implemented that feature by now.

worth noting is that S2 has the FPS limit cap.  we have to confirm if some sort of cap is applied to X3 as well.

these aren’t phones any longer – they are mobile computers, as with all computers – big screens are better

No they are not mobile computers, they are phones. That you keep in your pocket. And expect 2 days charge from. If you wan’t a computer buy a computer. If you want a tablet buy a tablet. I want a phone.

Yes they are mobile computers, that can make phone calls. If you want just a phone, than buy a cheap $30 nokia!

There will always be a successor to HTC Wildfire and a successor to LG Optimus One and the likes, which will target the 3.2″-3.5″ category, and a successor to the HTC Desire/Incredible which will target the 3.5″-3.7″ category. No one is taking those away from you.  But the market speaks with where people spend their money, and it looks like most people prefer bigger screens. Manufacturers are just following that and building what consumers want. If you want a smaller screen and 2 days battery, don’t buy a big phone. Go and buy a Desire S and slap an extended battery on… Read more »