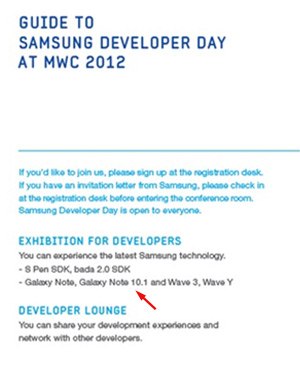 It looks as though Samsung have let the cat out of the bag for its Mobile World Congress device lineup in an email to developers attending the conference. As seen on the left, the Galaxy Note 10.1 is the device that interests us the most. This isn’t the first time Samsung have leaked out what they’re going to announce, last year they confirmed the Galaxy S II and new series of Galaxy Tabs days before the conference.

There have been rumours flying around for quite as to what the specs are for the tablet to be announced at Mobile World Congress, and so far it seems to have settled on a 2GHz Dual-Core CPU and a screen resolution of 2560×1600 — at 10.1-inches that’s a PPI of 299 which is insane for a tablet.

It’s also interesting that Samsung are sticking with the ‘Note’ series of devices. Perhaps this is their way of differentiating which product is suited towards what market. If ‘Note’ is tablets, then the Galaxy Note is a tablet, and not a phablet, and the ‘Galaxy’ series would be their line of smartphones (obviously!).

Or this could all be wrong because the invitation was meant to read ‘Galaxy Tab 10.1’ and not ‘Galaxy Note 10.1’. We’ll find out in two weeks when Mobile World Congress kicks off in Barcelona.

There is already an 11.6″ tablet from Samsung but it’s Windows 7 – available from JB Hi-fi but about $1500 from memory! There’s some pretty strong rumours around that Windows 8 will launch on an updated version of this 11.6″ tablet. I think there’s a post on the site somewhere about an Android 11.6″ Samsung tablet with a reduced bezel. This, of course, may make it difficult to grasp without touching the active part of the display. As for the merits of a higher resolution display on a tablet: 1. Video already looks awesome at 720p on my 10.1 2.… Read more »

Its taken Samsung over 4 months to release the Galaxy Notee 5.5 smartphone/tab and will probably take another few weeks to push it out with vendor support from Vodafail and Telstra (good work Optus.. Wait your not getting that model for some reason?) By the time this new 10.1 inch tab is released and ready to be bought here it will be replaced almost instantly. Just like how the note is being replaced. Talk about lag! Why does it take so dam long? The solution can’t be buy it as a gray import or get it from another vendor as… Read more »

Samsung makes too many variants of their products, if this is a Note, they need to replace the current Tab with this model for its next iteration and call them the same thing.  I can see having a different sized tablet but a 10.1″ Note and a 10.1″ Tab makes no sense.

Note could indicate compatibility with the s pen, which gives it a big advantage over other tablets. I’ve found it very handy on the Note

“specs are for the tablet to be announced at Mobile World Congress, and so far it seems to have settled on a 2GHz Dual-Core CPU and a screen resolution of 2560×1600″
What? Whoa!
Is this supposed to be the rumoured 11.6” tablet only that they have reduced the side to 10.1?

It was meant to have an 11.6-inch screen, yes. Doesn’t look likely anymore, unless Samsung have something left up their sleeve. I’d be more than happy for them to prove me wrong.