Home Mobiles Carriers This is the Samsung Galaxy S II 4G and it’s expected to... 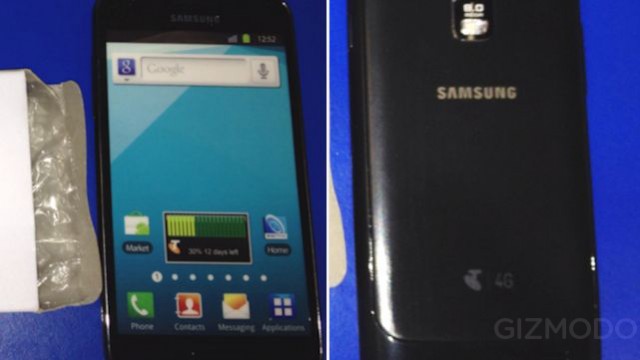 Gizmodo Australia have been sent a photo (well.. 2) of the Samsung Galaxy S II 4G dummy device that we reported are sitting in the back of Telstra Stores ahead of a launch later this month. Gizmodo’s source claims that the release date is pencilled in for February 28th, not just for the Galaxy S II 4G but also the Galaxy Note and Galaxy Tab 8.9 4G. This would bring Telstra’s 4G device count up to 2 phones and 1 tablet, with 1 or 2 phones left to go before mid-year.

Now that multiple sources have given us these details and they line up, the ball is in Telstra’s court to announce these bad-boys officially.

Waiting for the announcement guys!!

Judging by the look of the camera on the back, i’d say that’s the S2 4G, not the S2 HD 4G. Now it seems I can’t get a 4G phone with a HD display. I can either have an awesome display with the Note, or go 4G with the S2. This sucks.

Bad timing again… I have only just got a Galaxy SII a couple of days ago, and now they bring this version out..

I can guarantee they won’t be released on 28-Feb. More likely mid March.

I work for Telstra and hear quite early about release dates etc and nothing has been Noted in any upcoming release schedules, or future pricing schedules.

Does anyone know for sure the Galaxy note for Australian versions will not be LTE capable? Will the 4G Galaxy Note from US works with Telstra’s LTE?

Have just received the dummy handsets into stock… there’s a 4G symbol on the back of the new Galaxy S2 (looks a lot like the Galaxy Nexus in the way of the buttons but doesn’t have the size or curve like it either) and the Note doesn’t have the 4G logo… on that assumption, it’s not using LTE.

I’m keen to find out if the S2 4G will be running on Telstra’s clapped out KF2 firmware or if it’s running 2.3.6 or maybe even ICS? Interesting.

Its true have seen all 3 dummy phones but wondering if optus is taking them on?

Hoping work give me a 4G phone next week.

So the Note is confirmed as non LTE? I’m in Korea at the moment. Would a Korean spec Note work with Telstra’s LTE?

You’d have to look up the frequencies which the Korean Note supports.  Unlike GSM, there is no standard for LTE frequencies, so it is unlikely, but possible.

Yes, if it’s unlocked 4G or 3g no problem

Works on both apparently.

No, there is currently no variant of the Galaxy Note that supports LTE 1800MHz.