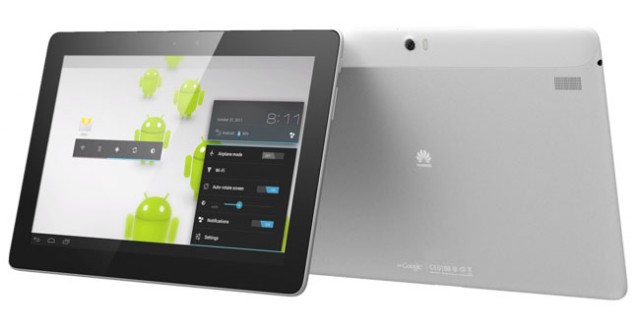 Huawei have just unveiled their brand new member of the MediaPad family, the MediaPad 10 FHD. As the name somewhat gives away, the device has a 10-inch display that boasts a 1920×1200 resolution (226ppi). Huawei haven’t been pressured into using Tegra 3 as their quad-core CPU, instead opting for their own proprietary 1.5GHz K3 processor — Huawei boasts that it is the smallest quad-core chipset in the world. The MediaPad 10 FHD also has insane HSPA+ speeds, with the modem capable of 84Mbps. LTE radios can be added in by carriers or Huawei at a later date.

This is amazing and clearly ahead of all the other Android tablets coming before christmas. A landslide victory for Huawei, they obviously know what they’re doing. As long as it doesn’t malfunction or fail then they’re going to have all the other manufacturers worried.

Who would have thought that Huawei would announce a tablet that is more exciting than anything Samsung had to offer?

2 GB of RAM….must be the first tablet with such huge RAM….can you confirm if there is a Mini/Micro USB port???

Anyone tell me if they think heat will be an issue with the quad core. A decent graphics sucking app / game and  I am wondering if the little baby is going to get hot in the hands?

This is really nice. Huawei are really growing. Fast