LG may be throwing their hat in the ring to build the new Nexus phone on behalf of Google but that doesn`t mean they`re going to stop releasing smart phones of their own and they`ve announced four new phones at Mobile World Congress. The new phones are the LG Optimus Vu -a behemothly sized 5″ device, the LG Optimus 4X HD which is their first Quad-Core CPU smartphone, the LG Optimus 3D Max, the successor to the Optimus 3D and the L-Style series.

Starting off we have the LG Optimus Vu :

The Optimus Vu is expected to be available in Australia either late this year or early next year. No pricing or plans but LG will advise which carriers and pricing for the unit closer to the launch. The phone/tablet launching this late in the year or early next year with Gingerbread, is majorly disappointing, given that Jellybean or the next iteration of the Android OS should be launching around this time.

Next we have the LG Optimus 4X HD :

LG advise the Optimus 4X HD will be available in Q3 this year, no pricing or plans at this stage but they will advise carrier info as the time draws nearer to the release date. Looking to be good spec wise the quad-core 4-PLUS-1 Tegra 3 CPU is rated pretty highly and it is also launching with Ice Cream Sandwich, although if it is launching in Q3 I would really expect nothing less. The Display sounds quite nice as well but we`ll have to wait and see the final product.

Moving on to the LG Optimus 3D Max :

LG is apparently in discussions with carriers and retailers to release the phone and they`ll advise specifics when finalised. Another device launching with Ice Cream Sandwich is just depressing at this stage, my personal opinion on 3D in phones and 3D in general is pretty negative but I realise that there are people out there who are interested in this technology and quite frankly I wouldn`t mind actually having a review unit to see exactly how its photos and video integrates with existing 3D displays in the market.

Finally we have the LG L-Style Series :
LG are launching a series of 3 phones which will feature what they are calling L-Style, the phones will feature timeless design and beautiful aesthetics. The design philosophy behind the L-Style range are Modern Square Style for a comfortable grip, Floating Mass Technology for a slimmer look, Seamless Layout for an intuitive arrangement of keys, Harmonized Design Contrast utilising metallic accents and a Sensuous Slim Shape that naturally draws attention to the visual appeal of the handset. 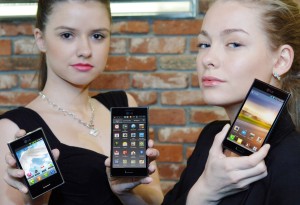 The Optimus L3 will launch first featuring a 3.2″ display, followed by two other devices which will run Android 4.0 Ice Cream Sandwich – Optimus L5 with a 4.0″ display and Optimus L7 featuringa 4.3″ screen.

The Optimus L3, Optimus L5 and The Optimus L7 will be available in Australia from Q2, 2012. Networks, retail channel availability and pricing plans will be advised closer to the actual release dates. Until we get some more specs and pics of the devices or perhaps some review units there isn`t much to add, the L-Style series looks fairly nice but i`m not sure I could go back to a 3.2″ display. It`s nice to see them concentrating on the design of their phones they did produce the Prada phone which I’m told looks fairly good, but I’m a spec junkie so as long as it doesn’t make me violently ill to look at I’m pretty much happy.

Overall LG has produced a good mix of phones that looks to appeal to all facets of the smartphone market, I’m intrigued with the idea of the 5″ 4:3 Optimus Vu and I’m quite interested to hear what Geoff our resident Ausdroid screen expert thinks of this. Over to you loyal Ausdroid readers, any of these going to be a phone you’re looking to purchase?

Looking forward to a hands on with the 4X. Q3 sounds like a 10 years away!