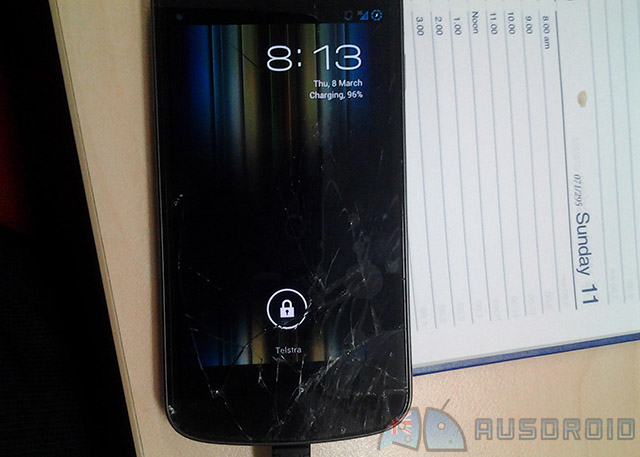 Sometimes a life comes to an end too early, way before its time is up. This is what occurred to Matt’s poor ol’ Samsung Galaxy Nexus last night. We can now confirm (to anyone that was asking) that in a fight between a Galaxy Nexus and tiles with the aid of gravity: tiles will always win.

Matt’s looking to (hopefully) get the screen replaced in the near future. However, if you have any positive words to cheer him up, leave them in the comments.

Update: Super wife to the rescue! Matty now has a brand new Galaxy Nexus in hand. Thank goodness for that. I also have smashed my screen. $170 later. Still its taken more a pounding than my iPhone. Smashed it 3 times in 2 years.

plastic phone is brittle… give me anodized aluminum any day.

Doesn’t matter if it’s plastic or metal, if dropped at wrong angle it will still smash

Exactly – while plastic may crack or split, aluminium will still dent / bend and squeeze the edges of the glass screen, shattering it.

Even gorilla glass will shatter if pressure is applied from the side.

I think this sort of pure fluff post gives off an unprofessional vibe.

Stop being such a prude

I feel your pain, Matt. My daughter knocked my “tough” Motorola Defy less than 60cm onto tiles a couple of months ago. Even in a silicone case I still got a crack and blue splotches on the LCD. Unfortunately I can’t afford to get the screen and LCD replaced, at about $180 so I’m living with it.

You guys haven’t got an old test phone you want to get rid of by any chance??? 😀 Motorola Atrix??? LG Optimus 3D???

Makes you feel any better my Samsung Galaxy note was playing up today it kept saying charging when nothing was plugged into it but it stopped :S dunno what i did to fix it just got real frustrated

Seriously, when you divorce your wife, let me know….

If you have a smartphone or any portable device of value, you must must must have insurance!

go super wife ! good news though hey! swap the screen out and sell that one (or throw it in the gadget drawer!)

I smashed my galaxy nexus screen about a month ago, had a similar fracture.
Got a new LCD Digitizer and swapped it over myself, there are some fiddly bits, especially where the fragile ribbon cable connects to the volume and power buttons, but otherwise, easy as cake. Perhaps a difficult cake, more like a soufflé.
Anyway, i’ll take it off your hands if you don’t want the carcass anymore. Fair price. 🙂

I dropped my SII also…that sucked… But ehile im here… Kony 2012 – Make him famous to stop him – http://www.youtube.com/watch?v=Y4MnpzG5Sqc&feature=youtube_gdata_player I guesa you coukd call it spam but its for a good cause.

The first time I saw this KONY 2012 on Youtube – I flagged it as spam (which lets be honest it IS).. then I actually clicked on it and realised what it was about.  Oops.

Sorry to here matt, hopefully I will get the screen replaced and she’ll be good as new!

U will* dam auto correct..

Like dcembury said, don’t replace the digitalizer yourself! I just replaced my Desire HD’s screen, and it was a nightmare. If you are going to do it yourself, get the full LCD and digitalizer.

Desire HD has a LCD separate to the touchscreen (but joined with adhesive strips). The Nexus has an OLED panel instead. The OLED panel is bonded directly to the back of the touchscreen on the nexus. It would be impossible to not use a full touchscreen + oled panel replacement part to repair it.
I work as a smartphone repairer. I have repaired over 50 DHDs and around 6 GNs.

Thanks guys, I’ve got a few quotes for a replacement screen but have to wait on parts. Despite the massive damage it still works fine, I’m using a screen protector so I don’t lose any glass – or cut my fingers!

happened to my old iphone, what ever you do, dont replace the screen yourself.

Don’t worry, Matt. It probably survived better than an iPhone would have.

Upgrade to an iPad 3? *trollface*

Sorry to hear, surely you have the sweet hookups to get this fixed without costing your soul?

Looks like one of those cool apple phone apps everyone has.

There There *Pat Pat*

Ohhh noooo!!! My friend has a SGS first edition and it had a fight with granite rock.  Same outcome.  Hope you can get a new screen soon.

And now you can justify an SGSIII 🙂

isn’t this having a gorilla glass ?

Gorilla Glass really only protects from scratches or point/frontal impacts. It doesn’t do shit against a side/corner impact like the one above.