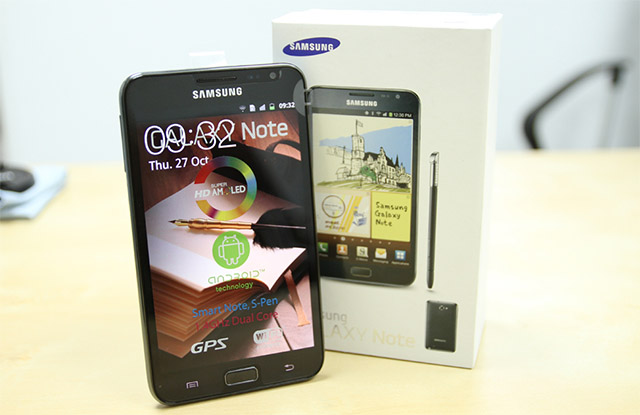 Samsung have sent out an invite to a media event to launch their latest and greatest piece of tech in the form of the Galaxy Note on March 13th — 4 months after it launched in other markets worldwide. The only carriers who have confirmed they’ll be launch partners for the Galaxy Note are Vodafone, Optus and Virgin (an Optus subsidiary) on their $79 cap.

If you’re not familiar with the Galaxy Note, it feaatures a 5.3-inch 1280×800 Super AMOLED display which places it in that niche area between a tablet and a phone. It’s powered by a 1.4GHz Dual-Core CPU and will run Android 2.3 at launch with Ice Cream Sandwich expected in the near future. Another selling point of the Galaxy Note is its S-Pen which is a stylus that allows for more precise interaction with the screen for things such as note taking or drawing. Other specs include 8MP and 1.3MP cameras, 16GB of storage, and 21Mbps HSPA+ 3G.

The Galaxy Note certain isn’t letting down on specs, perhaps that’s why Samsung have already sold 2 million of the things. Are you going to add to that number?

Ausdroid are attending a Samsung Launch event in Sydney this evening, we have a very strong feeling it will be for the Galaxy Note (no confirmation at this stage) but we should have more details this afternoon. Watch our twitter @Ausdroid:twitter

Well, it turns out that phone stores in Belconnen Mall (Canberra) have been misinformed YET AGAIN. Telstra and Virgin both say they won’t be getting it (and Virgin tried to sell me an iPhone as an alternative). Vodafone didn’t get any info from head office about the phone. Allphones said that the only thing they know about is the little price card in the display. JB Hifi had a dummy, but no further details.

Just got confirmation stock has shipped to my store in Penrith.  Should take delivery late this afternoon or tomorrow.  Fun,fun, fun

March 13th. Today !!
Where and When can i get a real physical Note to check out before buying.
Vodafone? Telstra? Optus?
I’m in the CBD let me know when your store has it to fondle.
THX Jeff

Dunno what CBD you’re in, but try JB Hifi

Will the White version be available at launch?

dwi got white for $565 and blue $545 free postage. They mainly sells cameras and have great reviews from whirlpool and me, might be cheaper and more trustworthy then ebay.

Be careful with “specials” from DWI – if they sell out of their “cheap” stock, they won’t ship your unit until they get another “cheap” set of stock. Meanwhile, ebay orders and higher-priced orders from them will get shipped before yours.

DWI: “We don’t make loss for any order”.
http://whirlpool.net.au/wiki/galaxy_note

I have seen heaps of these things on the trains every day. Why do they delay delivery like they do.
And why are we so trapped to the cariers in this country. Why don’t samsung sell them direct.

$79 on Virgin is way too much for the quality of service they have….if that is the price on Virgin ….for Telstra will have to shell out a fortune…

if it comes with NFC life UK version…..i’m sold 🙂

From an inside source (yeah I know, not another one) the end of March for Telstra.

Hey Buzz, can you elaborate on the last part of your post please: “The Galaxy Note certain isn’t letting down on specs, perhaps that’s why Samsung have already sold 2 million of the things. Are going to add to that number?” What do you mean by “Are going to add to that number” Something is missing and proof reading needed. I personally have the SGS1 & S2, and one was a ‘new’ replacement to my XPERIA X10, and the other a refurbished unit to check reception in my area. I hate both! They are just average for me. Just hope… Read more »

Still waiting for the Telstra Launch date… I WANT MY G-NOTE NOW !!!

The front camera is spec’d at 2Mpx (1600×1200).
I personally like the new GPS that also picks up Russian satellites.Bought mine in Nov – won’t be able to use a small screen phone ever again 🙁

Yeah my dad bought a GSII and wanted me to come over and show him how it works.  I use a Galnex I don’t think I could use anything smaller.  I came from a N1.

I’ve had one for a few months, leaves iPhone etc in the weeds. Watch this space. This device will take off.