The Tab 7.7 looks impressive with a silver metal (or white) rear and a gorgeous 16:10 1280×800 Super AMOLED Plus screen up front producing 196 ppi pixel density, this is the same resolution screen as the 8.9 and 10.1 in a smaller size and it looks amazing. The Tab weighs in at 340g and 7.9mm thick, compared to the Tab 8.9 which is 455g and 8.6mm and Tab 10.1 which is 560g and 8.6mm thick. A dual core Exynos chip clocked at 1.4GHz together with the Mali-400MP power the 7.7 (same chip as the Galaxy S II and Galaxy Note), as opposed to its larger Tab siblings which use Tegra 2. Onboard memory is 16GB, 32Gb or 64GB further expandable via the microSD slot. The battery is a 5100mAh Li-Po which is apparently amazing on the wifi version but I found drained quicker than I liked on the 3G version. Placing the Tab in airplane mode when you don’t need 3G will increase battery life significantly and lasted me 2 days. The primary rear camera is 3.15MP and the secondary front camera is 2MP.

Another small but majorly annoying issue with Touchwiz – the apps in the app drawer are not ordered alphabetically! This may sound like a small issue, but if you have 100+ apps like I do then it becomes very difficult to find things. An alternative launcher such as Go Launcher HD or ADW Launcher Ex solves this problem but you will lose access to some of the Samsung Touchwiz widgets.

Unlike a phone, a tablet is not going to live protected in your pocket; it is going to be stored in bags or handbags so a protective case or pouch is a must. Even though the Tab 7.7 is available at a few retailers locally, accessories are not and must be imported from overseas. The quality of these accessories varies greatly and it can be a frustrating experience to receive a product which is nothing like the picture. I ordered the OEM Book Cover case from eBay UK for AU$40 delivered and it is worth every cent. Third party cases are also available on ebay. 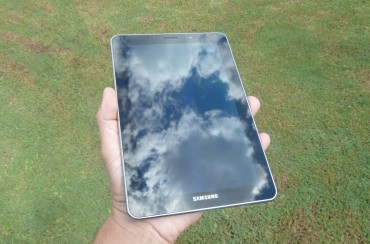