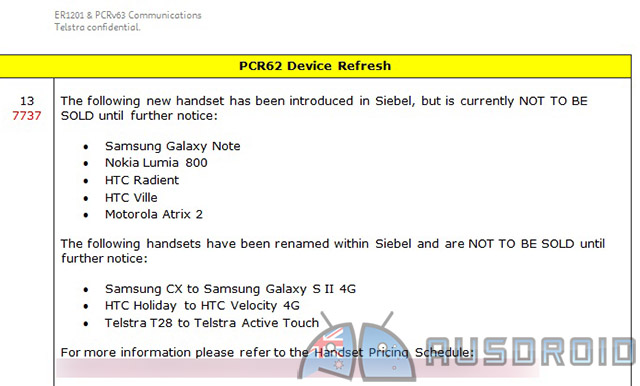 A friendly tipster has sent us in this screenshot of Telstra’s internal documentation. Within the documentation is a list of phones that have been put into Siebel (Telstra’s sales system) but cannot be sold yet, which means they’re confirmed to be launching at some point in the future — the Samsung Galaxy Note is a secondary confirmation of this. On the list is the HTC Ville — better know as the HTC One S, which means that it will be the other HTC One device to launch alongside the 4G-toting HTC One XL.

The other device of interest is the almost 6-month-old Motorola Atrix 2. It’s surprising to see the Atrix 2 coming to Telstra considering how old it is and that there are rumours of an Atrix 3 floating around.

Our tipster couldn’t provide any release date information on the devices, but going by the early April release of the One X on Optus and Virgin, we’re thinking the One S and Atrix 2 will also see an April launch date.