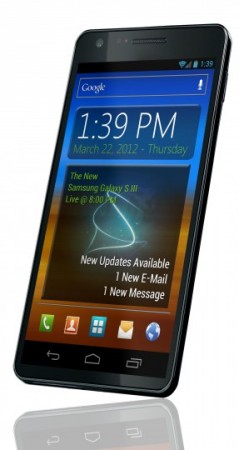 Here we go again!
This time the rumours on the SGSIII say that maybe there will be an announcement from Samsung making it official later this week at the Samsung Africa Forum. It struck me that this was also the date (22nd of March) that other rumours were specifically stating that we will NOT be getting further information about the pending launch of the SGSIII.

More and more information out of the USA is adding credibility to the rumours that the SGSIII announcement is coming, speculation that it has in fact passed through the FCC quietly and that there’s marketing work in place ready to launch “at the right time”. I’d suggest that the right time to get maximum exposure could potentially be around the time of the Olympics.

Another fake rumour.. The weeks over!

Gah!!! I need a new phone!!! I’m sick of having a Fisher Price phone that freezes when trying to send an SMS!!!

Na-da.. My money’s on a May announcement – much like what most leaks are already pointing to, the Olympics tie-in is simply too good an opportunity for Samsung to not capitalise on.

I doubt it. We haven’t received our invite to the launch event yet!

I’m going to spend the rest of the week refreshing the samsung mobile twitter profile .. oO

Don’t see it happening.
I’m sure when Samsung are ready to reveal it, they’ll alert the media and get some hype behind it.

Please be true!!!!!!!!! I’m so dying to get this ph and I’m really needing it soon.  Getting over my original SGS as its starting to have a few issues!! Can’t wait.  PLEASE BE TRUE

I’m having issues desciding between the One X and the SGSIII
C’mon Samsung, give me some reasons

Oh yes please! If this is any good, I’ll get this over the HTC One XL. *drool*

Please be true (with a launch being soon). I WANT THIS PHONE.