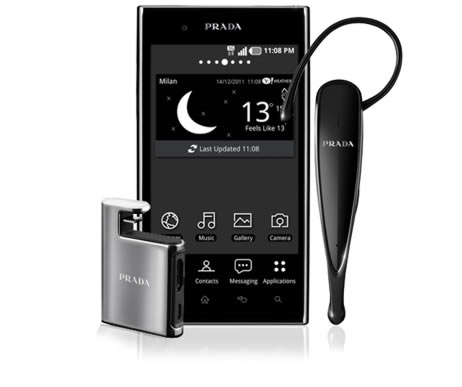 Attention Ausdroid fashionista`s, I know you`ve all been champing at the bit for this one so here you go. Vodafone have finally announced the pricing and availability for the PRADA Phone by LG 3.0, initially it will only be available online but will launch in-store nationally on the 11th of April. Pricing wise you`re looking at $0 on $59 plan over 24 months but Vodafone are offering a number of different variations for Business and Personal customers.

As a special launch bonus if you pre-order via the website they are offering 1 month free access fees until the 30th of April and for the first 200 customers who either call the 1300 number or order online before the 11th of April, Vodafone and LG will throw in a a Bluetooth Headset and Desktop stand(RRP $298) which you can see pictured above. Vodafone advise there is a 2-10 day shipping turnaround dependant on where you live, but it’s couriered out via Australian Air Express so should be with you ASAP.

The phone looks Ok spec wise with a 4.3″ IPS Nova+ Display and dual-core 1.0GHz CPU but it does launch with Gingerbread with an upgrade to ICS coming ‘Later in 2012’. Style wise the phone looks decent, the Black and White launcher they`re utilising looks pretty clean and basic but functional, but all that is a personal choice and i`m not really the person this phone is aimed at.

I’ll be heading to a Vodafone store on the 11th to try and get a look at one because by all accounts they are pretty well made. For more information on pricing/plans head on over to the order page.

as if, what a crap phone.

Gingerbread for the Optimus range took ~9 months from LG’s initial promised date. Some devices and networks still don’t have it.

LG’s ‘expected’ software release schedules are worth… nothing.