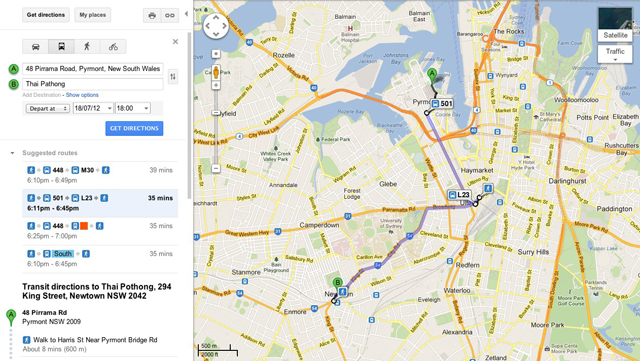 Google and the Transport for NSW department have collaborated to bring a feature to Google Maps that other cities across Australia including Canberra, Adelaide and even our own Lucas Burnett in Perth, have been enjoying for years: Public Transport Directions. You can now enter in an origin and a destination and choose a departure or arrival time within Sydney in Google Maps, Select ‘By public transport’ and receive schedule information from buses, ferries, trains and light rail services operating in greater metropolitan Sydney. The service is also available in 12 different languages including Mandarin, Spanish and German.

Pretty cool feature but one that is long overdue, this new service adds to the Bike direction feature that Google added a little over 2 weeks ago and it makes those Google Now cards look a little more interesting for you Sydney dwellers, now if Google can just add some sporting score functionality to them, that’d be great M’Kay.

I’ve been using the one in Perth for a while, but it’s not updated regularly enough to depend on. In Wembley, for example, Google Maps disagrees with the bus schedule printed on the 91/92 bus stand (which seems to be correct).

For those in Brisbane badger translink about it.
http://translink.com.au/site-information/contact-us-and-help/feedback

They have this naff journey planner when what is really needed is to make the real time transit data publicly available so it get get used by interested parties.

I used this to navigate around SF when I was there for #io12 the other week. It was absolutely brilliant. Gave different journey options, listed transit times, estimated arrival times, total costs, even told me what time I’d have to start walking to make the first switch point.

Fail for iOS devices to be leaving Google Maps… Still, Melbourne is the last it seems of the big cities to adopt this!

Even Darwin has it 😀

Doesn’t seem to work in Brisbane either.