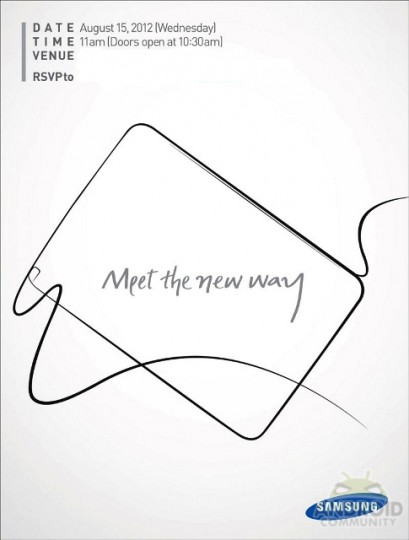 We saw today that Samsung confirmed that the August 29th Event in Germany was to launch the Galaxy Note 2, so that leaves the Galaxy Note 10.1 and from the look of the above invite that is being sent out to US press that’s exactly what Samsung plan to launch at the August 15th event. The graphic on the invite appears to represent a tablet form factor and seems to show a place for the stylus in the bottom left. That’s an interesting slogan as well ‘Meet the new way’ considering the Note 10.1 will be their first S-Pen based tablet.

We’ve seen the spec listing on the Galaxy Note 10.1 from Korea which boasted a Quad-Core 1.4GHz Processor, 16GB of internal storage, 2GB of RAM, 3G radio on-board, GPS, Bluetooth, WiFi A/B/G/N, IR Port and DLNA and DivX certification. So now to wait for the event, no word on whether it will be streamed but probably keep an eye on the SamsungMobile Facebook page which is where they will be streaming the August 29th event so fingers crossed they do the same for this one.

My tax refund has arrived, so now I just need a way to buy it.