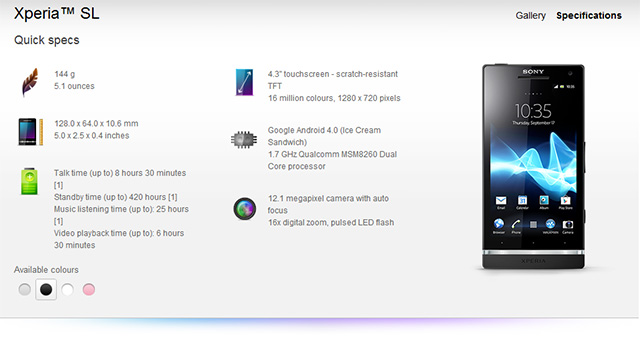 When Sony launched the Xperia S running Android 2.3, we were pretty disappointed, as were most of the tech industry. Sony promised that it would be updated to Android 4.0 in the coming months — that roll out has already happened across most of the world — but now they’ve announced a new device, the Xperia SL. The Xperia SL is exactly the same as the Xperia S in almost every way. The only noticeable differences between the two is the faster CPU in the Xperia SL — 1.7GHz MSM8260 dual-core instead of 1.5GHz dual-core — and that it comes with Android 4.0.

Same same but different.. kind of.

We’d do some deeper looking into what differentiates the two, but the link to the whitepaper for the Xperia SL throws a “403 Forbidden” error.

The Xperia SL will come in 4 shades: grey, black, pink and white. No release has been set, and no Australian availability has been announced, however, we have reached out to Sony Mobile AU for some confirmation of a local release at some point.

Does the Xperia SL interest you? It’s too similar to the Xperia S for a (possible) increase in pricing.

No white magic screen for this new model?

Ok, you made me literally LOL

I can’t get access to the whitepaper to see if it does or not. Nothing is mentioned about it on their site.

Big mistake if it’s not. Xperia P whitemagic screen is the most easy to read outdoors of any phone I’ve ever tested. Sony should use that display tech on all their mobiles from now on to differentiate