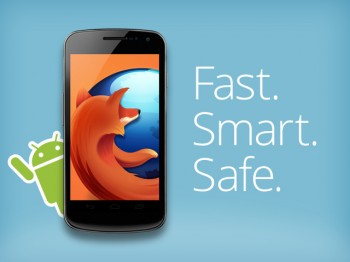 The so-called ‘Browser Wars’ have mainly focused on what’s happened on desktops, and while a clear winner might depend on your point of view, a clear loser is probably Internet Explorer. On mobile devices though, while there is a similar amount of choice, the browser you use is mostly determined by the operating system your mobile device uses. Android users probably use the built in Browser app more than any third party browser, Apple users of iDevices probably use Safari most, and so on.

However, for the third party tinkerers, Android has a number of 3rd party browsers that work pretty well – Google’s Chrome comes to mind, as does Firefox.

If you’re a tablet user, however, and a Firefox fancier, then you’ll be happy to know that Firefox has been updated to version 15, which comes with tablet support in the main-release version. It’s been available in beta for awhile, but now the official app has tablet support as well.

Not only this — Mozilla advises they’ve made dramatic improvements to the overall design and performance of the application, to the point that they think tablet support is as delightful as the phone experience. Big claim. Of course, the update includes other things, such as better search-in-page, the ability to request desktop versions instead of mobile, and the ability to import bookmarks and history from the stock browser – neat!

Me personally? I still like the stock browser, but Chrome would be my second choice – but for those of you Firefox fans, this will be right up your alley. Enjoy!

FF still shows no love for any older devices or lower spec devices.

its the only browser i could get flash to work on with my nexus 7, without having to use older versions of the program

Yep amazing that mobile chrome won’t support flash and adobe has given up updating their mobile releases. Had to side load it on multiple Nexus’s just to get it to work!

Chrome is great, but as a Google Apps for Business user, the real reason I use it is bookmarks sync. Not having to re-create all by bookmarks when I got my Nexus 7 was a real time-saver.
I know Firefox does bookmarks sync as well, but if you live in Chrome on the desktop, it’s a no-brainer.

I almost mentioned that.. But didn’t. Sorry Fred.

Dolphin is my preference as well, and stock for flash.