Just about everyone who’s owned a smart phone in recent times will know about Angry Birds. It’s that game where you toss birds – angry ones – at pigs who have stolen the birds’ eggs. Sounds kind of lame.. until you play it, and you realise it’s easily one of the most addictive and well designed games of our generation.

Well, the makers of Angry Birds, Rovio Ltd, are hinting at a new game that takes a different perspective. It’s not like the various iterations of Angry Birds we’ve seen before – Seasons, Rio, Space, etc – but from the pigs’ perspective instead apparently.

Detail is fairly thin on the ground, however  there are both Twitter and Facebook pages up for a game that is rumored to be called “Bad Piggies”. Makes sense. Further evidence is found in a press release, issued by the pigs, which surmises that birds stink, and pigs are awesome.

It will be interesting to see what manner of game this becomes, whether its the same physics type game we’ve seen before, or whether it’ll be a different type of puzzler — for example, a fortress building strategy. Regardless, Rovio makes pretty engaging games, so it will probably be pretty good!

Read on for the full ‘release’ below. 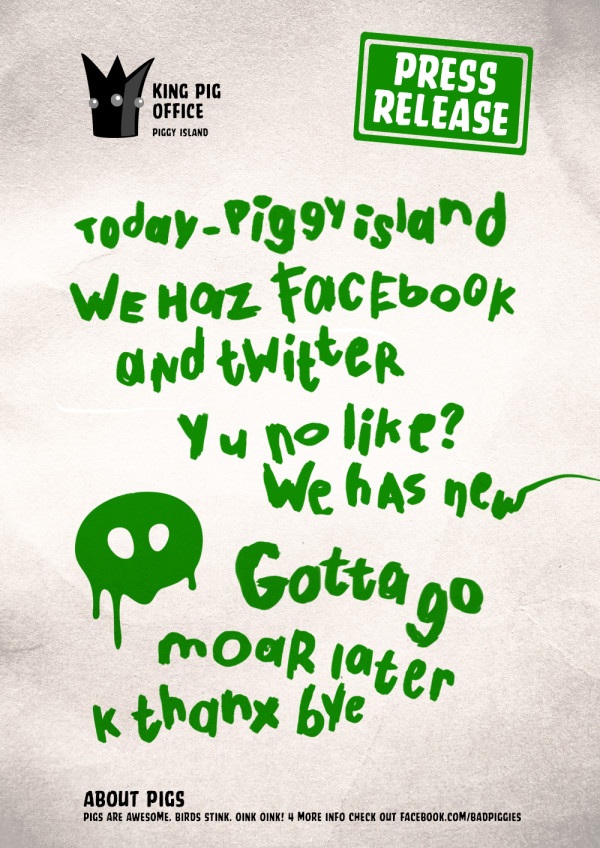 not an angry bird or pig

serious? one of the best games of our generation? maybe I’m just a little old and just don’t get it, but I’ve never understood WHY people got so excited about it… surely it’s up there with the toilet paper game for skill…

Cameron Charles
Reply to  not an angry bird or pig

youve obviously never played the game with the goal of getting 3 stars in every level, especially the new space levels takes a lot more then just flinging birds randomly anywhere your finger takes them

Johnny Anon
Reply to  not an angry bird or pig

He didn’t say it was one of the best game. He said…”it’s easily one of the most addictive and well designed games of our generation.”

i liked crush the castle too – why did they copy angry birds lol.