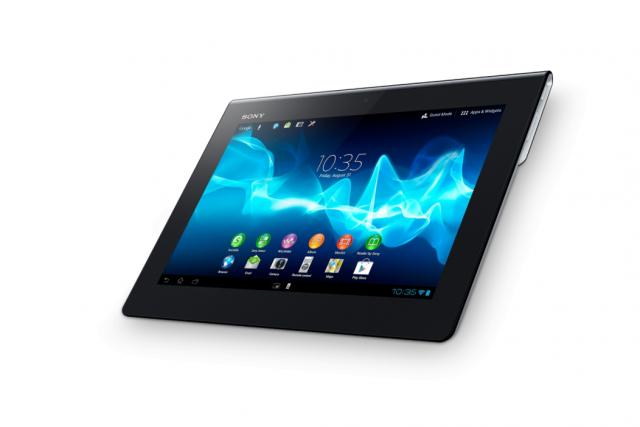 We really liked the original Tablet S when we reviewed it back in February this year, so it’s good to see that they’ve improved on a winning formula. The new tablet has been bestowed with the Xperia brand, has slimmed down, and is now aluminium and splash proof, but retains the comfortable to hold ‘folded magazine’ styling from its predecessor. It sports a 9.4-inch IPS screen with a 1280×800 resolution, Tegra 3 processor, with a full size SD card slot, IR emitter, USB and HDMI ports, BUT comes with Android 4.0 (Ice Cream Sandwich) with an update to Jelly Bean “in the near future”. No word on availability or price just yet, but they did mention a nice hard cover with built-in keyboard which looked interesting.

Also announced was the Xperia Go, a rugged dust and water resistant phone suitable for ‘parents, tradies and party animals’ (their words not ours). The phone will survive submersed under 1 metre of water for 30 minutes and is only 10mm thick. With a 320 x 480 pixels, 3.5 inch screen it won’t win any benchmarks but it will outlive most other phones. It is available from Optus, Telechoice and Allphones in yellow or black.

Unfortunately no word at this stage on the Sony Xperia T, Sony Xperia V, and Sony Xperia J which were announced last night at IFA but we will let you know when we hear more.

UPDATE: Sony report that there will be a local announcement regarding the Xperia T soon, but no plans for a local launch of the other models.