Samsung have launched a new ad that doesn’t hold back against Apple’s brand new iPhone 5. The ad, shown below, aims to inform people that the Galaxy S III is already the best of the best, so don’t even bother with this new bit of technology. The specs listed for the Galaxy S III are for the 4G version of the device, so those of you with the 3G version won’t have 2GB of RAM.

We’re liking that Samsung is going straight in for the attack now that they have the hardware to back them up. I wonder how long before we see these tactics played out here in Australia. 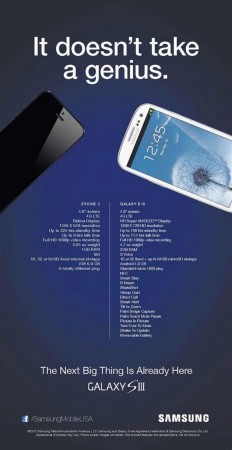 Its a shame they can’t do the same kind of ad in the tablet market. The Galaxy Tab 2 and Note 10.1 look pretty unimpressive lined up spec-for-spec against the IPad… It baffles me that Samsung’s 2012 tablet lineup is so unispiring when their phones have gone from strength to strength…

this ad is exactly what the public needs to see. I think it gives a fairly unbiased account of the features of each phone. there are no unique software features of the iphone 5 compared to the 4s especially since the iphone 4s is going to get ios6 (which is good for the iphone 4s consumer, but bad for providing a substantial incentive for knowledgeable consumers to purchase the iphone 5)

To be honest even as an Android supporter, I rather that they keep this battle restricted to the court room rather in the public domain such as TVs.

Well, it remind me of all the court room dramas over patents. I was interested at first but I thought it got a bit silly so thought “screw this, let ’em sort it out”. And now this ad tends to remind me of that on-going battle. Then again I’m sure a lot of other people sees the correlation and applaud Samsung for coming out fighting despite of their recent setbacks in the courts. But rather than ramping up their setbacks in the public domain, I feel that both companies should take a step back and focus on resolving their differences.… Read more »

It’s normal marketing~~
Other companies outside the mobile phone industry does this kind of marketing as well.

Why shouldn’t Samsung inform people about why their phone is better?

I’m not saying that they shouldn’t but as I mentioned in my reply to Buzz below, it just seems to be inflaming the court room dramas and bringing it out to the public sphere (it’s not entirely Samsung’s fault, I know).

Also it’s a personal thing but I get sick of hearing about Apple anyway. Samsung don’t need to mention them when promoting their products as I reckon that their phones have enough technological pundits to sell itself to the consumers.

In which alternate reality does the galaxy s 3 achieve up to 710 hours standby time?

The ad appears to be for the 4G / ATT version of the phone. dunno how much difference that would make to the standby time but i’m not convinced either

The iphone screen should of been smashed. Would of made it more realistic!

This doesn’t make sense from a best business viewpoint. Would you do this to your biggest client?

They’re separate bodies of the company (mobile, hardware). They can have at it, really.

And Apple suing the suppliers of their chips probably wasn’t entirely clever either.
If it was up to me I would have cut them off and watch them sink but there is probably some contractual obligations (or they just pay too much)

Probably because Apple is one of their biggest customers, cutting them off would probably be against contracts and make Samsung lose a few hundred million dollars. Same as apple, with a supplier that big, they can’t cut themselves away from Samsung without losing money as well, would probably have to pay more for components elsewhere and probably have contracts saying they will be a customer for a period of time.

Simple, Samsung Mobile doesn’t have apple as a customer, Samsung semi-conductors do, different parts of Samsung view apple differently. Unless the guys at the top of Samsung influence things, they can do as they please.
The marketing department of Samsung USA probably receives a good amount of freedom as well to do all this ads.

Your comment doesn’t make sense. For every client Samsung steals away from Apple, they make money on the whole phone, not just the parts they supply to Apple. It would only not make sense if they were telling people to buy a phone that wasn’t made by them.