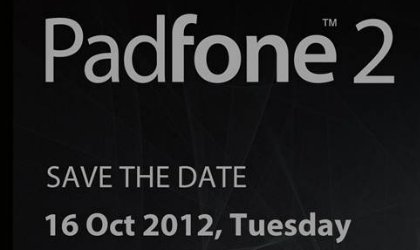 The Padfone has barely been on sale for a month here in Australia and it seems that Asus is already keen to launch it’s successor. According to Notebook Italia they have received a save the date invite for October 16th to announce the Padfone 2 which lists an event in Asus’s home city of Taipei in Taiwan as well as in Milan, Italy at the same time.

The Padfone 2 showed up in a recent Antutu Benchmark showing a CPU running a Quad-Core CPU clocked at 1512 MHz and further leaks speculate that the Quad-Core CPU will be a Snapdragon S4 Pro running with 2GB of RAM. All will be revealed at the event in just under a month, so now we just have to wait and see.

This feels waaaaay too quick for a follow up. It’s understandable though because I think the PadFone launched a bit under specced regardless of it’s form factor…

I havent even seen they market the first padfone anywhere.. now padfone 2 comes out? this is poor marketing…

I feel sorry for the people that invested in the original padphone. One of my friends got it I cant imagine he will be happy as it cost him a arm and a leg.

I really hate it when they supersede products so quickly. Asus seems to be on a 6 month update cycle as of late.. and people complain at apples 1 year cycle.

Hopefully this will drop the price of the original Padfone. It’s a cool device, but $999 for a heavy phone and a tablet is way too expensive. Especially when you can get a Galaxy Nexus and a Nexus 7 tablet for ~$300 a piece.

DAMN! just when I though the Note2 would be my phone of choice…
This product line really needs to be backwards compatible for me to feel that it has been done well.