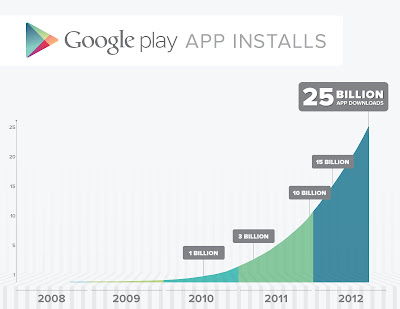 Google has announced over on the OfficialAndroid blog that they not only have over 675,000 apps and games on Google Play and they have have now had over 25 billion downloads from Google Play. To celebrate they will be having a sale, over the next five days Google will be offering apps from developers such as Gameloft, Electronic Arts, Rovio, runtastic, Full Fat and more for just 25 cents. Also on offer to Australians should be 25 Banned books at special prices. If you live in the US however there will also be 25 Movies you must own, 25 albums that changed the world and 25 top selling magazines at special prices as well.

This is basically what Google did last December when they hit 10 billion downloads and held their 10 cent sale. Looking at the graph the amount of downloads is increasing rapidly and with over 500 million Android Devices active and 1.3 million more added every day I see the 50 billion download mark coming up soon and with it hopefully a $0.50 sale.

Can’t wait to see which apps they have, I’m also interested if they’ll do anything in Australia, such as offering movie rentals from Google Play Movies for $0.25 or something similar. The sale isn’t live on the Google Play store just yet so let us know in the comments if you find any of the apps, books or movies for $0.25.

Great spotting Mr Daniel Tyson! I’ll be all over this like dots on dice! Cheers!