Yarra Trams recently released an Android version of its Tram Tracker application, satisfying the cries of at least one of our forum members.

A useful application for getting around Melbourne’s tram network, Tram Tracker offers realtime information and can quickly tell you when the next tram will get to the stop you’re at, or when the tram you’re on will get where you’re going. Every tram stop in Melbourne has a unique Tram Tracker ID, and trams are equipped with hardware for tracking and reporting their location information. Tram Tracker has been in operation for a number of years, and an Android-specific application has been a long time coming. The app’s user interface seems like a reasonable adaptation of the iOS application – the main buttons have moved from the bottom of the screen to the top (in much the say way as the Twitter app), and the icons are somewhat customised to Android standards. Unfortunately the application doesn’t conform to Android 4.0’s Holo UI design guidelines.

Yarra Trams also pointed out that the application wasn’t a straight port from iOS to Android – they’ve been doing research into what their users like and don’t like about the iOS application and made some changes as the app transitioned to Android. Notable changes include more efficient use of mobile data, information about attractions and points of interest near tram stops and more detailed information and alerts about service disruptions or updates. 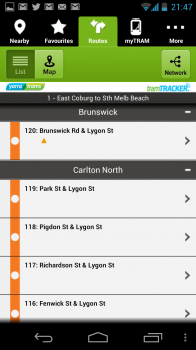 Curiously, in the transition from iOS to Android the app seems to have lost the ability to simply enter a stop’s Tram Tracker ID – you need to go to More > Search and enter the number, or go to the Map view and select a stop (identified by a pin on the map) in order to see the stop-specific information. Perhaps this oversight will be fixed in the future, but for now the Tram Tracker Mobile Site has the upper hand for functionality, if not design.

The app makes use of plain graphical symbols like a triangle or a dot to represent connecting services (a train or a bus) where a visual depiction of the connecting transport mode might be a better idea. Additionally, there seem to be some issues with zooming on the Network Map, at least on my Galaxy Nexus. From an aesthetic perspective the app seems simple enough, but there seems to be a tendency to use logos and symbols where they’re not really needed.

Tram Tracker is compatible with the Nexus 7, although it’s nothing more than a blown-up phone interface and it follows the Google stock launcher’s lead and only runs in portrait mode. It’s better than nothing, but it would be nice to see the app better take advantage of the extra screen space.

It will be interesting to see whether the presence of an official app discourages Andy Botting’s Tram Hunter app, which already provided an unofficial interface to the Tram Tracker service and has built up a passionate fan base during Android’s years in the Tram Tracker wilderness. Yarra Trams tweeted in response to an enquiry that Tram Hunter “wouldn’t be affected” by the release of their application.

Regardless of any specific qualms with the app’s functionality, or its tardiness in finally coming to Android it’s hard to complain, given the quality of the service and the accuracy of the information provided. The app does what it sets out to do, and that’s more than a good start. We’re still looking forward to future updates, though.

Now, if only someone would improve the abysmal Metlink app…

Tram Tracker is free in the Google Play store.

I’m glad that Yarra Trams have created the official app – they aren’t the ones who can give the public transport info to Google (I believe that’s the PTV).

It’s a great start of an app, but needs fine tuning once they work out how users use it ona daily basis.

This information should be also available to Google. I was getting transit information from Google Now in rural Maryborough QLD area! Can’t get it in Melbourne!

They should work on getting everything loaded into Google Transit instead.

Metlink have an app?

Next thing you’ll tell me is that they’ve released a matrix sequel.

Screw Yarra Trams and Metlink! As noted, Andy Botting’s Tram Hunter has been servicing Android users tram data needs for a long time (and very well at that). How about giving Victorian citizens something useful like Google Maps public transport rather then wasting tax payers money on unnecessary apps like this!

Just got back from London and found Google maps public transport info and all the cross-services and connection directions absolutely fantastic and combined with Google Now was obscenely useful.

Am salivating at the thought of support for it in Melbourne.

Public Transport Victoria has for years resisted calls to open its data to the public, treating as its own “Intellectual Property” and saying that it can’t guarantee the integrity of its data if it shares it with others. No mention of the fact that they are funded by our tax dollars and so this information should be publicly available, or that the data in question is so mundane and factual that it should not be copyrightable anyway (and isn’t copyrightable in the US). Anyway, if you want them to change their stance, at least write to them and let them… Read more »