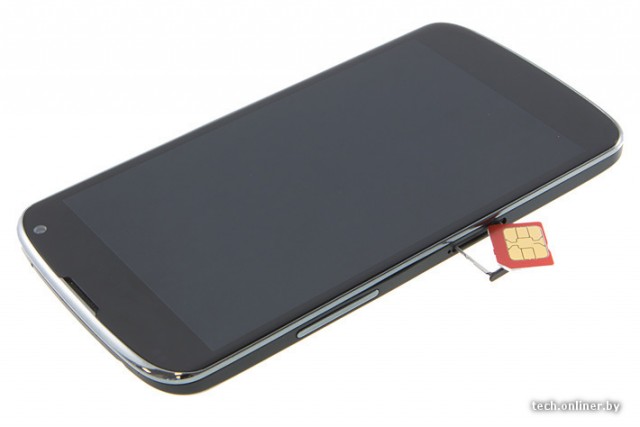 The Belaursian site Onliner.br has posted their review of the engineering sample of the LG E960 they have gotten their hands on which is claimed to be the Nexus 4. The review which is in Russian can be read over at the source link once translated and reveals a unit that software wise is suffering some software issues as could be expected for a prototype.

Among the issues discovered in the review unit are some non-working parts such as Beam and the capacative buttons appear to stop responding at times requiring a soft reset. Connection to a PC is still probelematic with no USB drivers available this causes the phone to go into an endless bootloop. The camera software and picture processing is also reported to be incomplete.

The LG Nexus 4 is rumoured to be launched on October 29th at the Dive Into Mobile conference in New York with an immediate availability via the Devices section of the Google Play store priced at $399. The $399 price tag would presumably be for the 8GB model, with rumours also circulating regarding a 16GB version that price would be possibly round the $449-$499 mark. Head on over to the source to read the full review but be warned it’s not exactly easy to read even with the translation.

A prototype is made to test a design, therefore if this has
8GB that means Google is seriously considering pushing out a device
with 8GB. Its not all that surprising after 8GB nexus 7 is it ?? That’s Google’s
way of pushing customers to use their
cloud services. But having said that I’m pretty sure they will release a 16 and
a 32GB model as well, otherwise this would be a major failure in markets where mobile
internet is too expensive or unreliable including Australia (i.e on networks like
Vodafone)

I just bought a HTC one S and reading this I don’t think I am going to have any regrets If all the nexus devices are like this.

Australian pricing? I’m still holding out for a Sony nexus though, or might just hold on for their quad core stuff in 2013

Can everyone please stop whinging about 8gig….this is a prototype device and doesn’t represent final specs and it is quite possible that 8gig is only for this prototype and there may not even be an 8gig model sold…Google still hasn’t announced this device anyway There seems to be Samsung fanboys having a whine on almost every site I read and every article posted. Relax everyone. I am sure LG is quite capable of making the hardware. If this thing had samsung written on it then everyone would be excited. Google is obviously still making the software and therefore this thing… Read more »

Such a shame it will only have 8 gig of storage. Even if there is a 16 gig version its still a fail. 32 gig is really the minimum for me.
Im really close to giving up on the nexus brand. Its obvious that google cripples the nexus hardware just to appease the OEM’s, i for one am sick of it.

the photo is upside down.
Yes, very similar to my Galaxy Nexus but has a metal trim and the speaker is on the edge at the top.
Difference seems to be with the pretty impressive benchmarks, but then since my GN does everything so smoothly and seamlessly without a single glitch in 4 months one must wonder what the value of going with a beefy quad core really is?

methinks the metal trim is a twofold mistake:

1. it looks cheap, ugly and old, like Nokia 2004 or apple 2007.
2. it gets way too close to the shape apple has just successfully sued Samsung over.