We were introduced to the Galaxy Nexus a year ago today and the Galaxy Nexus Google+ feed just posted a Happy Birthday message. In that message they also intimated that we may meet some younger brothers soon : 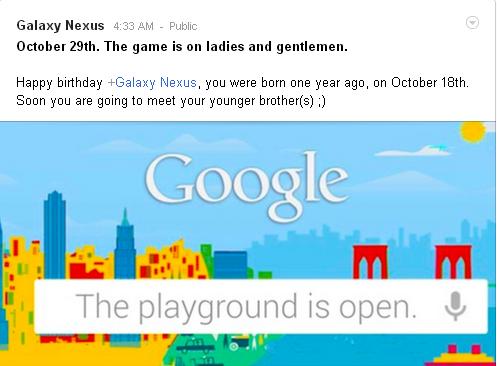 Of course this could just mean we’ll see the LG Nexus 4 and a re-launched Nexus 7 with 32GB and possibly 3G as has been rumoured on and off, or it could mean a full blown 5 Nexus device introduction from manufacturers like Sony, HTC, LG, Samsung and maybe Motorola? Well we’ll find out soon enough. The ‘Playground is Open’ event is scheduled for October 29 at 10am in New York (1AM October 30 AEDT for those playing at home) and will be streamed on the Android Youtube Channel. So who’ll be up watching the livestream?

**EDIT**
Android Police did point out that this is an unofficial fan page. Sigh. Moving along.

To me “play ground is open” means the grounds are open for multiple players to compete with their own nexus devices !!!

That would be the best option. Any manufacturer could make a Nexus device but there’d be strict minimum system requirements and a related obligation to release OS upgrades within a set (very brief) time-period – which shouldn’t be hard if all the manufacturer has to do is tweak some drivers.