We recently received an email notifying us that Samsung had done something both very unusual and slightly worrying! With the OTA update that Galaxy S III owners received they also received two bonuses of an unwanted nature :

My initial thought was this is odd, but I rarely change my app shortcut locations, widgets or app drawer so hadn’t made any chances since the update came through so I went and tried it, our tipster was right! We also checked in with a user of the Galaxy S III 4G and the same affliction was bestowed upon this device, despite the fact that it’s sporting Jellybean.

Let’s be honest, Touchwiz isn’t the prettiest or anywhere near the best launcher out there so why on earth would Samsung do something like this that drives people to others?

Despite the jokes, we did do some investigation into the reasoning behind this change, one source stated “That’s what Google wanted” which by virtue of the fact that the stock Jellybean launcher doesn’t suffer this was immediately confirmed to be unlikely.

We put the question to Samsung directly to find out the reason for this unusual and very unpopular change. After a little convincing that we were serious and required an answer to the question, Ausdroid was told:

Samsung is unable to comment on the changes at this time.

With recent changes being made to Samsung phones to get around recent Apple lawsuits, this change did get me thinking, does Apple or someone else own a patent on an app drawer and home screen customisation that would cause Samsung to introduce these restrictions?

As usual, only time will tell but for those of you wondering how to get around this – Nova Launcher is a great start! We will continue to investigate the reasoning behind the change and advise as soon as we can get some answers beyond what Samsung has already provided. 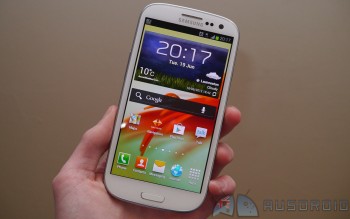 Apparently a solution of sorts is to flash another firmware (eg the UK one), change drawer to some apps you actually use, then flash back to Australian firmware.

Despite how painful that sounds I’m tempted, as the default ones are wasting some prime homescreen realestate.

Uk stock jelly bean has not got this issue. It seems only us Aussies get it

Rang Samsung and asked why this isn’t possible on the s3 4g.all I got told was “sorry, but it can’t be done.”

What I don’t get is it’s only an Australian thing. I flashed my GS3 to a stock UK JB firmware and everything worked fine again. It has to be an Apple legislation thing based on something that has been passed locally.

Nova Prime or bust. If it wasn’t for third party launchers; I wouldn’t buy a phone other than a Nexus. Samsung, HTC, and LG launchers are useless. TouchWiz being the worst. The only thing I like about TW framework is the camera app. I buy Samsung for the design and hardware, not the software.

Optus gave me this update a few weeks ago Ausdroid. Annoying but I noticed a little speed increase.

I also bought Nova because of this “update”. I didn’t realise you couldn’t change the dock until I did a master reset and bam… stuck with icons I don’t even use. Discovering that Nova is a billion times better in the process was an added bonus.

Very frustrating change with little or no info available. Went with Nova Launcher Prime shortly after the 4.0.4 OTA.

The S3 4G had this ‘feature’ on launch and cemented the fact that Samsung is Apple 2.0 and other manufacturers aren’t getting the credit they deserve.

+1 for Nova Launcher! Bought Prime during the sale and am loving it ^_^