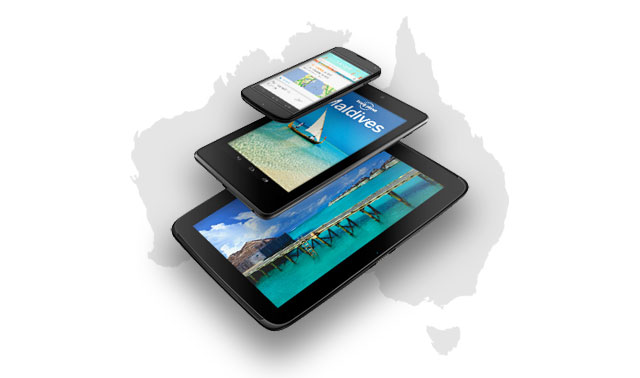 Google’s full range of new Nexus devices – the Nexus 4, Nexus 7, and Nexus 10 – will be released for sale on the Australian Play Store on November 13.

If you’re looking for a new Nexus in Australia though, there may be other on- and off-line retailers you can go to, and it might work out cheaper than buying direct from Google.

We’ve collected information about all the retailers and sites we know of that will be stocking the new devices, and we’ll keep this page updated as more information becomes available.

If you have new information about Nexus devices available for sale in Australia, please let us know! You can tip us (anonymously), email us, tweet us or let us know in the comments.

Update 2: Sold out! The 16 GB model sold out in 20 minutes, the 8 GB took slightly longer. We’ll update as soon as we hear when stock will be available again.

So far, the only place you can buy the Nexus 4 is directly from Google. At this stage, we’re yet to hear of other retailers planning to stock the Nexus 4.

Update: MobiCity now have the 8 GB Nexus 4 in stock.

The Nexus 7 is the most ubiquitous of the Nexus line. You’d be hard pressed to find an electronics store that doesn’t sell it these days, and some of the prices are quite competitive. Update: most of the big stores have no stock in their physical shops. Yesterday, none of the Officeworks or JB Hi-Fi stores in Melbourne CBD had stock.

Bing Lee are currently selling the 16 GB Wifi-only model for $267, and have the 32 GB model on order with stock scheduled to arrive next week and cost $319.

CPL have the 16 GB model available on their website for $249, with pickup available from their Notting Hill or West Melbourne stores, or shipped for $10 – $20, depending on location.

Domayne are said to be selling all three models of the Nexus 7, including 3G, but no orders for the 3G have been placed yet.

Harvey Norman are selling the 16 GB Wifi-only Nexus 7 for $257. Some stores are showing out of stock (Melbourne QV), so you should check online or ring before going in person. If you choose to order online and have it delivered, you’re looking at an additional $5.95 and a 2-day wait.

At this stage, JB Hi-Fi are only selling the 16 GB Wi-Fi model of the Nexus 7, and it’s retailing for $267 with free shipping to anywhere in Australia, or in-store pick-up. They have not yet announced availability for the 32 GB model.

Update: We have heard rumours that JB Hi-Fi will be stocking the 32 GB very soon, and that it will cost $319. This seems reasonable, as Officeworks are also selling it for the same price.
Update 04/12: The 32 GB is in stock, and costs $298.

MSY are selling the 16 GB for $259. You can check stock levels on their website before you head down to the store. At this stage, it seemed that they had stock in most locations.

Officeworks have told us that they will be selling the 32 GB Wifi-only model for $319, and it should be in stock around November 12. The 8 GB and 16 GB models are listed as out of stock on their website, but some stores still have limited stock. If you’re interested in one of the smaller models, you’d be best ringing or visiting your closest store for more information. It’s worth noting that this is the same price as you’d pay from the Play Store plus delivery, but you get the benefit of having the device immediately.
Officeworks | 32 GB – $319

Update: The 32 GB model has sold out on the Play Store.

DMavo and Millennius have told us that they plan to carry the device, but have not released a date or pricing yet.

We’ve received word that Harvey Norman is going to carry the Nexus 10, and their price will be competitive with the Play Store.

Nexus 10 are in stock in Google Store.

Google store now has both the models of Nexus 10.

Man, when is the Nexus 10 32 GB going to be available? Google store has been out since before Christmas. And the regular retails like JB, Good Guys, Norman are all clueless on estimated arrival.

Just received the following from Kogan (21 Dec): Due to global shortage in supply of the Google Nexus 7 (32GB, 3G) that you have purchased, we unable to fulfill your order for this product. Your refund will be issued within 24 – 48 hours.

http://www.bhphotovideo.com/c/product/899687-REG/ASUS_nexus7_asus_1b32_4g_32GB_Google_Nexus_7.html Is the nexus 7 going to come out in 4G frequency in Australia. This should work out at around 330AUD shipped from b&h photo.

Went to Good Guys today and they are expecting the 3G Nexus 7 to land tomorrow. They’ll also do it for $384 if you pay “cash”

which store? I had bought online and was in contact with them, but they said that unfortunately it will arrive in mid-late December. Therefore, I had to cancel my order because I’m going overseas on the Dec 8.

Mobicity has the Wifi and 3G version of Nexus 7.
Kogan has the 32GB Nexus 7.

Do you trust Mobicity? I called them before purchasing to get a confirmation that the could actually deliver and the couldn’t guarantee. go and read some reviews…there are many cases where they have somehting ‘in stock” but in fact don’t and custumers had to wait long time to receive their orders

I can’t comment on trust given I’ve never bought anything from there.

Their model of business for Nexus products (probably others as well) is similar with Kogan. The stock will come from overseas (likely Hong Kong). And you will be essentially buying a Hong Kong version of the product (nothing wrong with that). But, when it comes to warranty, the local manufacturer may not recognise and likely needs to be shipped to Hong Kong. An extended wait for warranty work is likely, then.

Want the nexus 4, don’t want to pay $100 more than the Google price to local retailers. I support indie but not to the tune of $100 X(

my 2x nexus 10 due Wednesday, easier ordering online perhaps unboxing at tech-news.tv when it happens 🙂

Anyone have any experience with order delivery time from Kogan? I ordered a 7 16gb over a week ago on Friday 9th. Still got no word of delivery from Kogan.

The bumper is not yet available in australia. At least I didnt get a chance to order one at checkout. It was just listed as ‘coming soon’.

I did however manage to get the 16GB version before it sold out.

Apparently they did go on-sale but only very briefly, I missed out on one, hope to get one when they come back into stock. Anyone got a bumper they want to sell?

i managed to purchase one about 2 hours after i bought the N4. still waiting for delivery of the bumper though. my n4 has been tendered for local delivery so should receive that tomorrow. had no status update for bumper yet even though they took my money…

Anyone know when the Nexus 10 will be available at Harvey Norman?

tomorrow!!!! at any harvey norman outlet

where does this information come from?

Not on their website, not sure why they’d be starting stock selling on a Sunday either. Maybe Monday?

so when are they getting it?

Anyone knows what time in Australia the Nexus 4 will open for order? 0:00 or ??

I have been asking Google when the orders open up, however they have not had anything to say on that front as yet.

Please do let us know if you find out!

ok,im hanging out for the nexus 7 3g ,so is it available at dick smiths tommorrow ,the 13,i cant follow this here.

I’d be keen to know what time the Nexus 4 and 10 will start selling on the Play Store.

Just bought the Nexus 7 16GB from Harvey Norman (Thomastown) for $250. They had plenty of stock and they didn’t refuse my offer. JB wouldn’t even budge under $255 and that’s after telling them that HN had it for $257.

I really want to know if the Nexus 10 will be available on or around the Play Store release date. Itching to buy one, but I don’t want to buy one + postage and find out that it’s available $50 cheaper 2 days later at JB.

the store prices for the Nexus 7 basically were the same as the play store price with postage, so Nexus 10 retail pricing may be the same