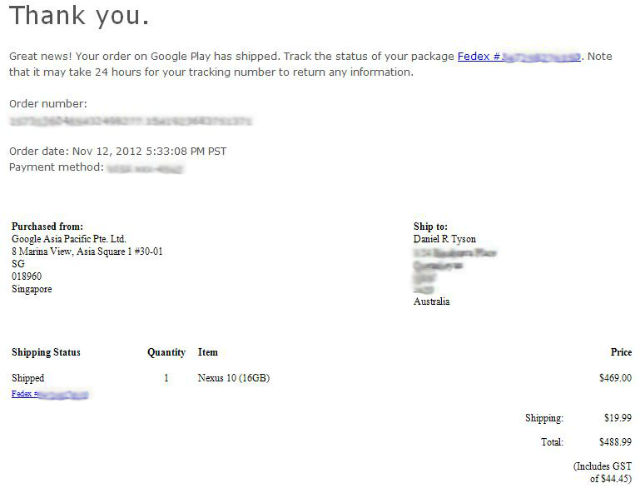 Last night we saw the first shipment notifications being sent out for the Nexus 4, now it appears the Nexus 10 orders are being looked at. I just received my shipment notification details from Google which includes the FedEx tracking number. As with the Nexus 4 orders however the ETA is wildly optimistic with an ETA expected by 5pm tomorrow with the package still being listed as not even having been picked up from its starting point in Hong Kong.

My order is for the still in-stock 16GB Nexus 10 so if you’re still after a new Nexus you can still acquire one of these devices. Let us know in the comments if you’ve received your shipping notification for your Nexus 10 and if so which one 16GB or 32GB.

Lucky you. I live in Hong Kong and cannot get one yet…

Sitting in a warehouse in Alexandria over the weekend….the temptation to drive down and try and get it was so intense, hopefully it arrives tomorrow

Mine arrived in Sydney this morning (Fri) and ready for release – BUT – in big red letters – A FedEx system outage has delayed release…… NOOOOOOOOOO!!………. estimated delivery day now pushed to Monday 🙁 ahwell… I always wonder why these releases seem to get tied up with the weekend.

Although mine says estimated to arrive 6pm Monday 19th, Fed Ex updates shows the Nexus 10 is on the vehicle now for delivery today 16th…pretty stoked!

My ETA is Monday at 6PM. I’ve never seen a postie driving around at six in the evening, so I’m gonna be hanging out for tuesday. In the meantime, if I set the date and time for destination timezone, apparently it got shipped tomorrow morning. Wait what?

buying offshore, from an international company. is GST really applicable? Will out Govt actually see it? just sayin’

You’re buying it from “Google Asia Pacific”. Not so much international.

They have an ABN and pay GST:

hi wherealien, is your intention to do a refund? any chance you were successful doing a refund even with the purchase coming from Google Asia Pacific? thanks!