The great news is that Droidax take the opinions of reviewers onboard and they have fixed it! There was only a minor change that needed to be made to the cap of the powerpack to rectify this fairly major issue. Great news for anyone that was thinking about purchasing one but held off to because of this cautionary point.

Well Droidax are at it again, they’ve used the same battery pack chassis to create a receiver for the EzyCharge Wireless charging unit for the Samsung Galaxy S III.

Having shown a number of people this gorgeous little device, the bulk that’s added to the device is the first — and only — objection they come up with. Most people who’ve seen it comment that it looks slick and feels nice, so for the convenience of having wireless charging, the added bulk is a small drawback to overcome for the convenience of simply placing your phone on the desk next to you while you work. Should it ring all you have to do is pick it up, no fiddling with cables before you answer it.

Through my dealings with Droidax, I believe that they have a true belief in their product and the manufacturing quality to back it up. They have produced possibly the best value, and certainly one of the top 3 performing portable charging devices currently on the market followed up with other after market accessories such as spare batteries, battery packs and now the EzyCharge.

The fact that they are so receptive to constructive criticism of their product further shows their commitment to delivering a quality product to the market (perhaps some of the OEM handset manufacturers could take a lesson from Droidax?). I don’t turn easily, but I’m nearly ready to confess that: I might be turning into a fanboy of their products.

For someone who really values the asthetics of their sexy, slim phone: The current generation of wireless charging devices like this one are probably not for you. But if you’re a Galaxy S III owner who can overcome the minor inconvenience of 80 grams and 15mm extra thickness on your phone, you’re probably going to find it hard to resist purchasing the EzyCharge.

NB: This review was written on the understanding that the review device would be returned, Droidax have since offered us the option of keeping the device which we’ve taken up. Droidax’ offer has in no way affected the conclusions reached in this review. 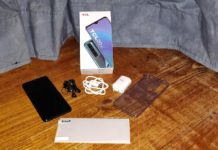 TCL 20 SE Review — The first stop in the TCL journey

Clearly, the SGSIII is not big enough as it is.

People who say the Galaxy Note II is too big are kidding themselves. They fit perfectly in to most everyday pockets, and I like millions of others would love to have one.