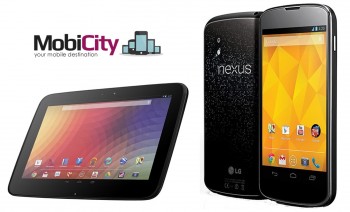 Update: Mobicity have the 8GB Nexus 4 in stock as of now.

Every day, I check around the internet in the hopes that the Nexus 4 is on sale again. Today, I was pleasantly surprised to see that MobiCity have begun taking pre-orders for the Nexus 4, and they have the and Nexus 10 in stock at the moment.

At $449 for the 8GB model and $499 for the 16GB, ordering from MobiCity will cost a bit more than buying directly from Google, but considering how quickly the Nexus 4 sold out when it first went on sale, it might be worth paying the extra to avoid disappointment. It’s worth noting as well that the Play Store does not allow ore-orders.

There is no word on when the Nexus 4 will ship yet. To see other retailers who are selling Google’s Nexus devices, check out our Nexus buying guide.

8GB at mobicity now sold out, pre-order only.

Patience children.
At least wait until Kogan sells it… 🙂

Is it only me is that seeing the shine being taken off a great spec phone that was originally priced to make it affordable for everyone by companies around the world charging almost 50% above the original price! On principal I am going to hold out until Google get more stock, I can easily afford the extra, but don’t want to reward what appears to be price gouging.

Definitely not worth buying from them.

What if Mobicity doesn’t buy it in time either? You’ll have to wait even longer while paying $100 more.

They’ve probably had them in stock for a while ready to sell.

If they are smart that’s exactly what has happened. You’ll pay the premium until Google gets stock.