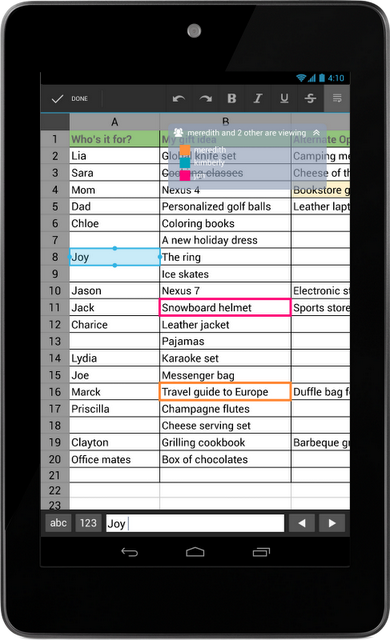 As Google Drive becomes more popular and more widely used, the Android (and iOS) app seems to be concurrently getting better and better. And with the latest update, you can now edit spreadsheets on the go.

The update adds the ability to be able to create a new spreadsheet or edit an existing one. And much like on your computer, there are more advanced functions such as the ability to change fonts, sort data and re-size columns.

And when collaborating with other people using the same spreadsheet, you’ll see their edits in real time as they happen.

There are a number of other minor changes in the update including improved text formatting when copying from one document to another, and editing text within tables is now also possible.

The update is already available on Google Play.

You were always able to edit the content in spreadsheets, however the implementation is much better and you never had the formatting options before. Very nice update.