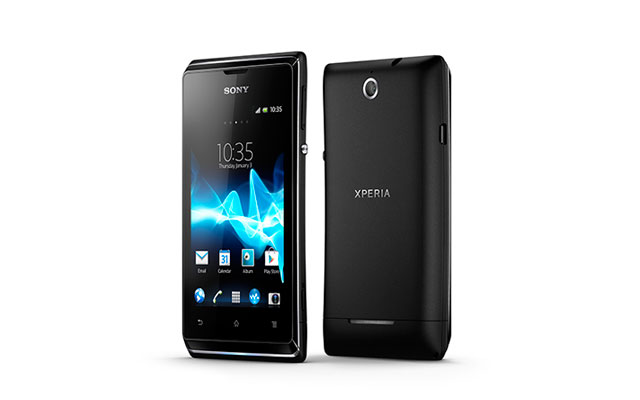 Power users will find little to write home about here – the spec sheet reveals the Xperia E to be a mid-to-low spec device powered by a Qualcomm MSM7227A Snapdragon S1 running at 1 Ghz, 512 Mb RAM and a single rear 3.2 MP camera, behind a 3.5 inch 320×480 TFT display with a 1500mAh battery running the show.

While the specs aren’t likely to excite, it’s notable that the device will launch with Android 4.1 – it’ll be interesting to see how Jelly Bean performs on this hardware. The phone also supports HD Voice and lists noise cancellation as a headline feature.

Sony is pushing affordability and cost and power management with a “data usage application” that will monitor data usage, and an “extended standby mode” which disables wifi & mobile data and freezes applications when the screen has been off for a few minutes while leaving calls and messages operational.

This focus on affordability is likely the reason for the push into dual-SIM territory, a big plus in markets where consumers often switch SIM cards to take advantage of cheaper calling rates on their preferred carriers at different times of the day.

Note that while Sony’s press release states the device will run Jelly Bean, the specifications pages both say Ice Cream Sandwich. We’ll update the post when we receive confirmation.

How many models have Sony released this year? They seem to have million different phones on the market at the moment? S, Arco S, T, J, E, U, P, V….. Seems like they are really lacking any kind of strategy at the moment. They just seem to be releasing everything they can. But they seem to be getting quite limited carrier support in Australia at the moment. I reckon phones like the T or V would sell well on Telstra plans for example, but if it hasn’t happened by now, they’ve missed the boat… Telstra seems to be much more… Read more »

Most of those handsets were all the leftovers from Sony Ericsson. Them they came to the market with only ‘Sony’ branding. Couldn’t afford to can all those models now could they….

Sony seems to be aiming at the lower end at the moment.

They can’t compete with Samsung at the top, so they are releasing phones for the pre-paid, “buy a phone at the supermarket” end of things. Aiming at Huawei’s customers.

Not quite the first time