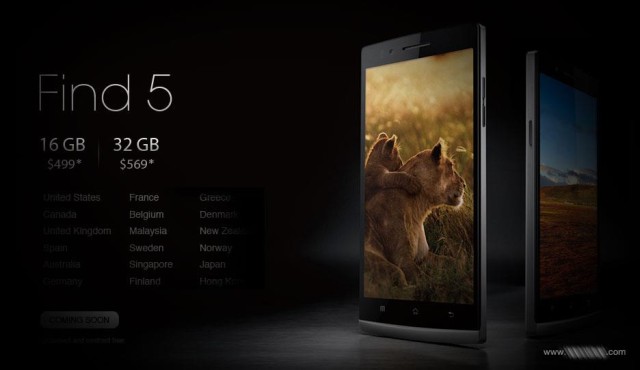 Looks like the first phone in Australia to sport a 1080P display could be the Oppo find 5. The above image which Oppo shared on their Facebook page shows a 16GB model for $499 and 32GB version for $569 also shows that Oppo intends to supply this phone in Australia. With those prices it’s obviously going to be available only as an outright purchase but with a 1.5GHz Snapdragon S4 Pro CPU and 1080P display and a relatively reasonable price, does it really matter?

Engadget has been advised by Oppo that they intend to roll the phone out into all the markets listed by Q1 2013 as soon as possible after their initial launch in China, as well as heading to some markets that haven’t been listed yet. It appears that Oppo intends to market the Find 5 in as many international markets as possible from a centralised website which will be announced closer to the phones launch.

You can bet we’re interested in getting our hands on this phone but we’ll have to wait for further details. If you’re in the market for a new phone with an insanely high pixel density and can’t wait for HTC to launch details of the HTC Butterfly/DLX/Deluxe or whatever they intend to call their model when or if it arrives in Australia then this phone could be for you.

Are you interested in a phone with a 1080P screen?

The big Q id if we are going to get LTE bands on the phone.e

If it has sdcard and removable battery, I’m sold. I heard it only has 2300mah battery… not a good sign for a 1080 screen

Any ideas what OS it will be running?

Judging my the icons on the buttons it will be Android. It would have a Windows icon in the middle if it were a windows phone.

Oppo makes the best consumer Blu ray players. Their products are high quality and their customer service is great. I would have no problem buying a phone from Oppo.

hmm ive never heard of the brand before and all they have on their website is a few bluray players.

I would want to know what the build quality and the companies support is before i put any money down.