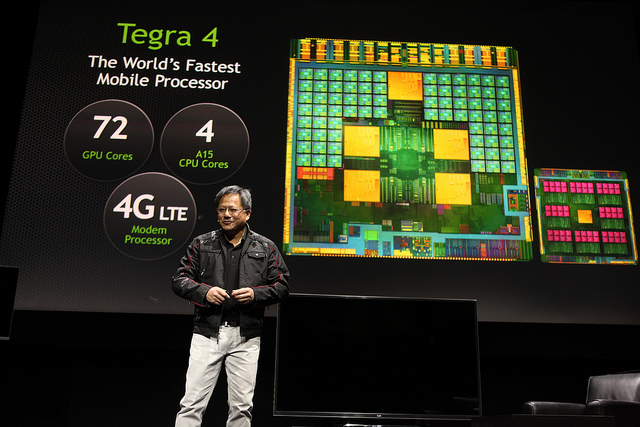 The other main unveiling at NVIDIA’s event today’s event was Tegra 4 — NVIDIA’s next-generation mobile CPU. It features 4 Cortex-A15 CPU cores, 1 ULP (ultra low power) companion core — same idea as Tegra 3, 72 GPU cores, and although it’s not on the actual Tegra 4 chip, there’s an Icera i500 4G LTE modem that can be purchased separately by manufacturers. Qualcomm, on the other hand, can produce CPUs with the LTE modem built in (system-on-chip) which also reduces power usage. It remains to be seen whether Tegra 4 can out perform in real world use.

Tegra 4 has six times the processing power of the previous generation Tegra 3, and is the first CPU to have a quad-core implementation of ARM’s Cortex-A15 architecture. The i500 4G LTE modem is 40% smaller than competitors which is meant to bring with it lower power consumption which is good news for 4G users.

Overall, Tegra 4 is faster, more power efficient, and just plain better than its predecessor. Besides Project Shield, no other devices have been announced with Tegra 4, however, with manufacturers to show off their wares in the coming days, we’re bound to see a few devices with it.

Qualcomm have revealed their next generation chipsets. The Snapdragon 800 is their high-end chip which is supposed to be a 75% CPU performance boost and a new Adreno 330. I believe it also has an integrated LTE chip.

How that will stack up to the Tegra 4 and Exynos 5450 I don’t know. Have to wait till Anandtech benchmark it.

Either way, I’m willing to bet Apple will again make a new chip that’ll blow Tegra/Snapdragon/Exynos out of the water, just as they did last year.