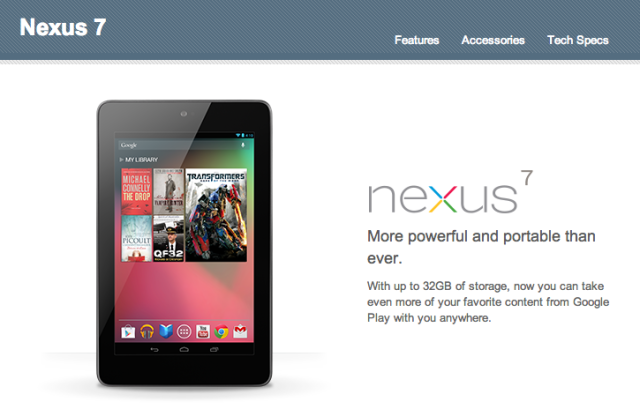 We’ve received a few tips indicating that the Nexus 7 32gb 3G model has now become available on the Play Store, and we’ve confirmed the Nexus 7 3G is definitely listed there today, and it wasn’t as recently as a couple of days ago when I last looked.

However, before you get all excited with your credit cards, observe what we’ve seen — currently, there’s no stock available. Surprise surprise.

If you want a Nexus 7 3G, and you should, they’re awesome, then there are other places you can find them at the moment:

Other places selling the wifi-only Nexus 7 (e.g. EB Games) don’t appear to be selling the Nexus 7 3G yet, though this may change.

Let us know if you’ve taken the plunge and bought a Nexus 7 3G, which could be — at least in my opinion — the best Android tablet of 2012.

Thanks: To all our tipsters!.

B+H Camera were doing them cheap before Christmas, so I got one for my fiancée for less than all of the local prices (inc delivery).

Great tablet, makes my Iconia A501 look ancient. Don’t know why anyone would buy a tablet without 3G, tethering is bullshit and having data access on it makes it so handy.

Showing as in stock on the Play store right now! $349

Erm – currently says there is stock, and 3-5 days for delivery. Maybe we’ll get some Nexus 4’s soon too!

I grabbed one a couple of weeks ago from JB Hi-Fi. They didn’t even know they had stock until I told them their website said it was so. Apparently the stock had arrived that same morning. Totally worth the upgrade. I love not having to tether my tablet to my phone any more.

Same here. Would hate to go back to WiFi only as I’m away from WiFi most of the day. Got mine from MobiCity just before Christmas. Awesome tablet!