Following hot on the heels of the Vodafone rolling out Jelly Bean to their Galaxy Nexus it appears that Optus has finally started rolling out the Android 4.1.2 Jelly Bean update to their Samsung Galaxy Nexus phones as well. Thanks to a tip from Aram it looks like the update is hitting handsets as an OTA update and initial report is that it’s a bit sluggish to start off with but does get faster. 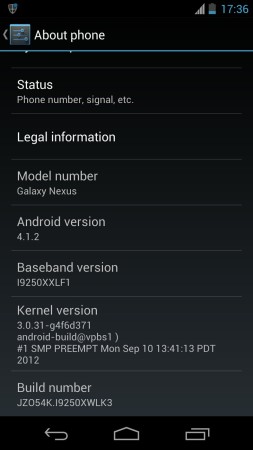 The update will most likely be sent out in stages over the course of a week as most updates are but to prompt your phone to check for a software update you can go to Settings > About Phone > Software Update > Check now for update.

Telstra is the last to push out the update with the status of their Jelly Bean update listed as :
‘Test submission received and currently in test. Unfortunately a potentially serious issue has been identified which is still under investigation. Approval and deployment dates are now “TBC”.’

Let us know in the comments if you have received your Jelly Bean update on your Optus Galaxy Nexus and tell us what your favourite new feature is. Remember we love to hear about device updates, so if you see your device receive an update let us know via twitter or email.

Telco: IINET who utilise Optus network. Cheated and got JB 4.1.2 [3rd Feb] using a prepaid Voda sim I had in a usb modem dongle. I had to clear the data cache in the Google Service Framework and got update immediately. Could still be battling either faulty SIM or mobile radio [not wifi] as radio tx turns off and won’t re-activate [have to restart phone]. Built is “yakjuxw” as it was under ICS 4.0.4.

This is ridiculous. So Voda and Optus have released Jelly Bean for the Nexus, yet the unbranded handsets are still waiting. I would assume for the unbranded no carrier testing is required so can someone please tell me what logic is going on here?

I’m not sure how Telstra can find a potentially serious issue when I was running that version months ago no problem and now running 4.2.1, also with no problems. Maybe it’s not the new android version that’s the problem but their B grade apps have a problem with the new version? If so it makes newly touted software division look like a bunch of chumps. The sooner telecom companies learn and accept their role as dumb pipes the better off we will all be

Out of interest – doe anyone know what build the Optus GN has? Also, anyone know if Yakjuzs ever got Jelly Bean?

My Optus GN is “yakjuxw”.

Abysmal that the Nexus devices receive this update after the S3, and especially after notoriously slow HTC with the One X. Poor effort, Optus.

Have been trying to get this for 2 days now but it keeps crashing on install!