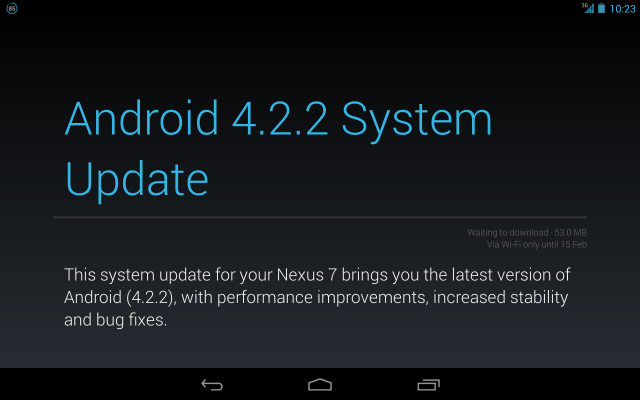 Want the Android 4.2.2 update on your Galaxy Nexus, Nexus 7 Wi-Fi/3G or Nexus 10 right now? Well reports are hitting that people in Australia are seeing the update right now after performing a brief workaround.

To force your device to udpate you’ll have to go to Settings > Apps > Scroll across to All > Google Services Framework > Press ‘Force Stop’ then ‘Clear Data’. Once you’ve done this go back to Settings > About Phone > System Updates then hit the ‘Check Now’ button and this should then prompt your device that the update is ready to go.

The Android 4.2.2 update brings with it some fixes as well as some updates, which Android Police have broken down :

They’ve got the full run down on all the Commits to AOSP over on their article if you’re really in the mood to source out all the updates but for now just update your Nexus devices and enjoy and of course wait for the update to hit the Nexus 4.

Updated my Google Nexus 7 32GB 3G and now my cellular / Telstra connection won’t work. The bars showing amount of service only turn blue when wi-fi is switched on, otherwise they are grey.

How does Google decide which device gets the update now and who has to wait? My JB purchased 32gig WiFi Nexus 7 didn’t receive the OTA update until Sunday morning 17 Feb, despite many many attempts including clearing Google Services Framework. Is it because I’m in QLD and we are to stupid to have daylight savings?

seems to have fixed my gps lock issues

You can force the 4.2.2 update to come through on the Nexus 4 by doing the following just like the old samsung galaxy’s

1. Go to Settings -> Apps -> All
2. Find Google Services Framework.
3. Tap on Force Stop.
4. Select Clear Data.
5. Head back to the Nexus 4′s Settings, go to About, and check for a System Update.
Note: only works on wifi atm

Jake A
Reply to  Jake A

tbeta
Reply to  Jake A

Jake A
Reply to  tbeta

tbeta
Reply to  Jake A

Thanks. Same problem here & same fix as you. The article instructions need this very important step.

Pete
Reply to  Jake A

Did you clear the Google Services Framework? If so, that’s the problem. Clearing it tells Google yo have factory reset your device. re-adding your account to the phone usually fixes it. But looks you’ve already figured that out.

smooth download to day on my Nexus 7, on the nsw south coast 🙂

I hope BT is fixed, sick of adding my PIN each time I connect to the hands free unit on my 4

Here’s the ota url to sideload it:
http://android.clients.google.com/packages/data/ota/google_mako/de8b8d101614.signed-occam-JDQ39-from-JOP40D.de8b8d10.zip

Not getting the ota update, how would I go about side loading? Links?

you need to use ‘adb sideload’ command using the Android SDK and the Recovery menu.

Link here for instructions (sorry for linking to another blog):
http://www.androidpolice.com/2013/02/13/the-nexus-4-finally-gets-android-4-2-2-jdq39-as-well-here-are-instructions-for-installing-it-manually/

or you can just wait for the update to appear evenutually

Wouldn’t work for a Galaxy Nexus though unless you changed your firmware to Takju.

YAKJU Galaxy Nexus is going out OTA now, so yes it is possible this could work.

The Australian Galaxy Nexus was Yakjudv (at least the Telstra version) so no joy there.

International Unlocked Galaxy Nexus is Yakju so they should be receiving it now. All Galaxy Nexus from Australian Mobile Operators will of course ALWAYS have to wait for approval before the OTA is pushed…..unless you flash the factory image from Google -Hint, Hint.

And over the air it came 🙂

Just updated on my Nexus 7 in Perth! 🙂

have tried all this, even the registering through google play. will not work, any other advice, am stuck on 4.1.2 in Sept 2013