We’re just under a week away from the Xperia Z’s official Australian launch on February 20. Many of the Ausdroid staff are excited to see what Sony’s cooked up for us, keen to see whether the phone lives up to our high standards and interested in how Sony’s adapted and customised Android Jelly Bean for its flagship 2013 device.

If you’re interested in seeing the phone for yourself, Sony is allowing customers an early peek at the device at its Sony Centre stores around Australia (except Drummoyne and World Square). Both James and I ventured into our local Sony Centre stores to check the device out. Our first impressions follow. 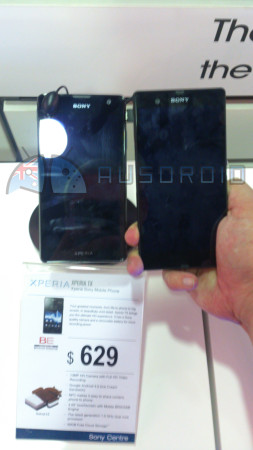 The physical size of the Xperia Z’s 5” screen didn’t feel as if it was too big, as I am currently used to the Xperia TX’s 4.6” Display. You can see a slight physical size difference between the Xperia TX (Left) and the Xperia Z (Right) below. As you may have noticed, the Xperia Z has glass on every side of the device. This really gives the phone a solid look and feel, although my one worry about using glass on all sides of the phone, is how catastrophic it would be if I were to accidentally drop the phone on the pavement. Aside from the concern about shattering the glass on the phone, I am really impressed by the overall design. While flicking through the menus and multi-tasking on the Xperia Z, the operation of the phone felt rather smooth. With the combination of the S4 Snapdragon quad core processor, 2GB of RAM, the Adreno 320 GPU and Android 4.1.2 Jelly Bean, I found the performance of the phone to be quite impressive. I didn’t get a chance to have a play around with some of the nifty features such as Google Now as it wouldn’t connect on the in-store Wi-Fi. So far the Xperia Z is looking like it will be a great phone in 2013. It would be hard to say if it will be very popular here in Australia as it is very early in the year and it hasn’t officially launched yet. The phone will be a bit high on the price side as Sony Centre’s will be stocking the phone at the price of $749. The major mobile carriers Telstra, Optus and Vodafone will all be stocking the phone so you won’t necessarily need to purchase the phone outright. The Xperia Z is a very attractive device. It is thin and light, with a glass back and large, high-resolution display on the front. Although the screen was nice, I didn’t think the colour saturation was as good as that on the One X, but this might have been due to brightness settings on the display model. On the software side, Sony did a good job of adding their own skinned applications and features, while still keeping with the general design aesthetic of Jelly Bean. Something that I really liked was how Sony chose to integrate their applications with Google Now, so you can search the messaging application, emails and Sony’s Walkman application directly from Google Now. The phone’s performance was exemplary, not lagging at all, no matter how many applications I opened at the one time. I’ll give Sony some credit here for really optimising the software on the Xperia Z, but I’ll also credit Jelly Bean and the Snapdragon S4 Pro system-on-a-chip that powers the Xperia for its beastly performance. Sony has launched a Micro-Site for people who are interested in the Xperia Z to sign up to receive information as soon as it’s available. You can head over and check it out here.

Are you going to buy the Xperia Z when it arrives? Have you been into the Sony Centre to have a hands on look at the Xperia Z? Tell us in the comment section below what you think.

I did not like the glass back as I have already broken an unbreakable gorilla glass screen so I have gone for the XL and as I cannot find anyone in Melbourne that has one either to buy or a plan I have had to buy on line.

I had a play with this phone on Saturday and I was a little underwhelmed. I am a display whore. Colours, pixel counts and resolution matter to me…a lot. I was really not impressed with the colours on the Sony Experia Z at all. I have a HTC One X and comparing that to the Sony, The One X colours looked a lot more vibrant. I went through the settings looking for something to adjust, however nothing changed the washed out colours. Also the phone in my opinion was not ergonomic at all. I would prefer if Sony actually made… Read more »

Also when I say vibrant I am not talking about the child like colours that most Samsung phones screens produce IMO. I am not a HTC fan boi by any means. However so far out of all the displays I have seen the HTC One X has for my eyes the most balanced colours.

Are you sure?
Reply to  Alex Zabukovec

Really…because it sure sounds like you are a HTC fan boi! Having a dig at samsung too.Does the HTC have well balanced battery life haha

Alex Zabukovec
Reply to  Are you sure?

Nope I own a Galaxy Nexus so I am not biased. I loved that phone. That’s not true that all Samsung phones have that amount of saturation, However the S3 and the Note are far too saturated for my liking. My battery is fine. It lasts at least a day of usage. Where did the battery comment come from? I am talking about colours. I was also dead set on the Sony Experia X however after seeing the screen and how the phone sat in the hand I am not so sure.

http://deff.co.jp/news/2013/02/effxperia-z-so-02e-tennage.php
Wood protective plates for the Z.
Seen on akihabaranews.

Haha wtf….why would anyone want to cover such a sexy phone with that wood grain crap! maybe they should make some carbon fibre ones,that could look good & give protection at the same time.

Because wood looks leaps and bounds better than all that tacky carbon fibre crap.

Had a play at Sony Centre Galleria today. Looks good though I share some concerns about the screen contrast – could just be the lighting in the shop though. Didn’t seem to “pop” for lack of a better word. Build quality is great. Solid and feels expensive, compared to a Note 2.

Was this a post or pre production model? There appears to be two different versions out there. The production models appear to have a vastly superior screen. Seems to be why the reviews on the net differ so wildly.

How do did you find the contrast and screen in general? would you say it’s at least comparable to one x etc? Some reviews say it’s really bad…

I think it’s really good, although I’m used to the screen on the TX, the best person to ask is James as he has a One X

The screen was definitely good, but I don’t think it was as good as the One X. Both displays have pixel densities over 300 ppi, so I’d say the higher resolution on the Z wouldn’t make much difference, but I found the colours to be washed out compared to the One X. That could be a matter of taste though.

imo the colours are no way as bright as the HTC One X I would agree with James Finnigan that they appear washed out. I wish I could have taken pictures comparing the Eperia X, HTC Once X and a Samsung Galaxy Nexus. with those 3 compared it would give a good comparison. This would imo show saturation scale.

We’ll probably do something like this in our review. I too would like to see a proper comparison.

I meant a S3 not Galaxy Nexus. The Nexus had the most balanced colours of all the Samsung phones I have seen to date

Whats your thoughts on the cover on the USB?

Do you think it will break off after a few months of use?

How strong does it feel since thats the direction they are kinda going with it.

It’s similar to the cover on the Xperia go which Matt and I reviewed a fee months ago, I don’t think it would break unless you tried to

Hmm very appealing. Might stick with my Note 2. It’s gonna be hard to let go of my 5.5′ real estate.

And this will be eligible for Vodafone new 4g upgrade once it rolls out. As per vodafone Google+ page

Yeah it will, I only put Optus and Telstra as they are the only ones with 4G on launch

From looking at the display model in the store, we’ve concluded that the battery lasts forever 🙂

They must have just turned on the stand by mode. And there is also no sim in the phone….so u really cant say it will have gd battery life

I was just joking, since the display phones are all plugged into chargers constantly 🙂

Neato. The back glass though. Argh. It’s such a “I won’t consider this phone because of…” feature.

It does. I’m keen to pick one up. It seems awesome in many ways, but still…