Looks like the Wi-Fi version of the Samsung Galaxy Note 10.1(GT-N8010) is receiving it’s Jelly Bean update now. Thanks to a tip off from Michael we can confirm the update is now available via Kies as a 505MB download and takes the Galaxy Note 10.1 up to Android 4.1.2. 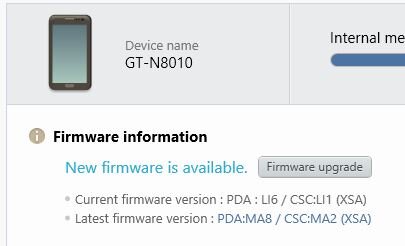 The update was also advertised by the SamKiesUpdates Twitter feed :

This just leaves the GT-N8000 3G Galaxy Note 10.1 waiting for its Jelly Bean upgrade, which hopefully won’t be too far away. Remember we love to hear about device updates, so if you see your device receive an update let us know via twitter or email.

My GT-N8000 is downloading the update now! Finally the 3G update users have been waiting for.

There is a Big in Gallery. If you Try and select a single Photo and Share it, you do not get the option for Gmail. If you Multiple Select, you have the option. Once you use that multiple photo send in Gallery to Gmail, then when you go back and try to send a Single Photo, Gmail Magically Appears. It Also Magically Disapers. But the Trick Works again and angain.

Issue Though, maybe by design. Before I was able to share Photos from the Gallery direct to Gmail. This is also an Issue with My Wife’s Galaxy S2 Phone. I have since downloaded a “Gallery ICS” App with is similar, but not as “Pimped” up as the Samsung one. Anything that I have Missed?