Vodafone has announced that they have kicked off 4G trials in Sydney’s Eastern suburbs. So far they’ve been testing the data speeds and MMS Services and their handover of voice calls to the nearest network, ensuring that the handover is seamless and users do not notice a drop in service.

They’ve been testing the 4G service in the 1800MHz spectrum, the same spectrum used by both Optus and Telstra on their 4G Networks. Vodafone has powered up 4G towers in the Alexandria, Bronte and Randwick area where they are running tests using 10MHz of bandwidth; however, Vodafone intend to be using 20MHz in Sydney and all the states in Australia when they do launch. The 20MHz of spectrum will effectively give them double the bandwidth of Telstra in most markets and an advantage over Optus who operate using 15MHz of bandwidth. 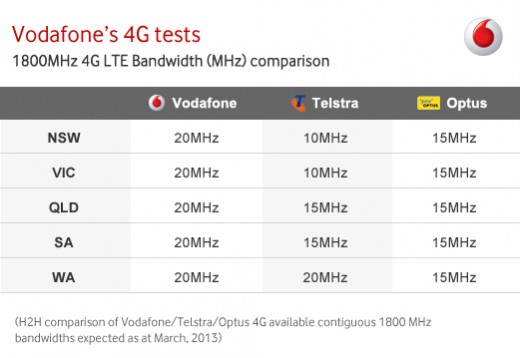 So far they’ve been getting some pretty impressive speeds according to their SpeedTest screenshot, however these results should be taken with a grain of salt due to the lack of other users on the network and Vodafone advise that once the network is live users should see average downloads between 2Mbps and 40Mbps : It’s a pretty good start but Vodafone are already starting on the back foot with many users leaving over network concerns. However, with these initial test speeds showing pretty good throughput and a brand spanking new 4G network with 20MHz of bandwidth to play with, the Vodafone 4G network is off to a very promising start.

The worst service provider is the Vodafone,New companies are providing much better service than VODA FONE its name should be Khoda Fone, No customer service No response for enquiries, lame excuses Can Please some one guide me how to sue Vodafone because i have lost my 3 customers because of their service, Reception . NO network Coverage in the Surrounding area of SYD AIRPORT which is the busiest part of Syd. I request for the Copy of my contract, the terms and condition 3 times, they don’t wanna give me. My customers said to me If you cant communicate how… Read more »

I get perfect reception. I cannot wait for this roll out!

Vodafone’s reception has gotten so much better, and I cannot wait for this to go live!!

IPhone will likely require an update of some kind, as the iPhone doesn’t operate on LTE unless certified by the carrier and by Apple. This shouldn’t require more than a carrier bundle update though which is easily done.

And yes, we meant Optus and Telstra. Typo corrected 🙂

impressed….so should i renew my contract with them????
this speed only happens when there is a signal first ;p