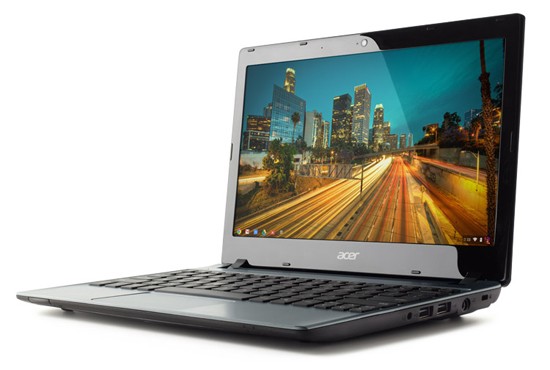 We’ve covered a bit of news on Chromebooks in the past, because while they are not Android, they are made by Google, but beyond this, they are also pretty damned cool devices. Our own Daniel Tyson rocks one of the original CR-48 Chromebooks and he loves it. You would too.

One of the more modern Chromebooks — the CR-48 was released back in 2010 — is the Acer C7 Chromebook. Like most Chromebooks, you can’t buy them in Australia normally, leaving you with the option of importing it yourself using a freight forwarder, or buying one from an importer like MobiCity.

The Acer C7 is powered by Google’s Chrome OS, which means that it’s basically a laptop running a browser, except that browser is Chrome and you can install a heap of web-apps from the Chrome Web Store to make your laptop far more useful. The Acer C7 features an 11.6-inch HD screen, a Dual-core 1.1GHz Intel Celeron processor and provides 2GB DDR3 RAM. It also has the things you’d expect — Wi-Fi, ethernet, a 320GB HDD for local storage, an Intel HD Graphics GPU and HDMI out, so you can chuck your display up on the big screen or your TV.

If you’re after a new laptop, and a Chromebook will meet your needs, you can now buy the Acer C7 from MobiCity for $AU349.

Well that’s not really accurate is it.. even if you were to do it yourself, you’re paying at LEAST $250 to get it here, and that’s with fairly crappy shipping. If you want it trackable, or better yet, somewhat quick, you’re looking around the $70 mark, plus you have to organise the freight forwarding yourself. For $349, you pay a bit of a premium, but equally, you’ll have your Chromebook overnight, and you don’t have to worry about anything. For some people, I’m sure that extra money is worth the savings in effort etc. But hey.

Warranty is Australian based for that price too.