The guys over at @evleaks may have just leaked the design of the upcoming Samsung Galaxy S IV on Twitter. The two images that have been posted show a squarer phone than the previous Galaxy S III which matches up with the cases we have seen making their rounds on the internet.

One of the images also shows some specifications that seem to match with the specs we saw leaked earlier today. Those specs are:

None of this is particularly surprising however evleak’s track record is a bit hit and miss when it comes to this sort of thing but only time will tell if the renders come close to the design of the final product. 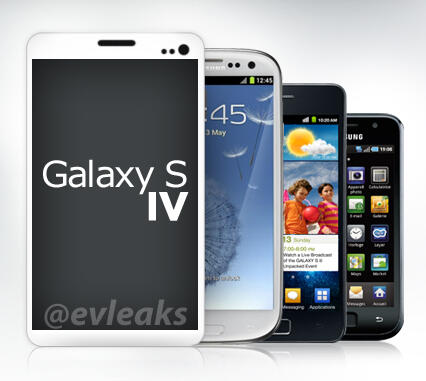 Would only make sense if they were trying to make the phone smaller…so it was more an s3 size and less note size. Otherwise like someone stated there would be no reason to have the note as well if the size were next to nothing. The note 3 could in theory be 5.8 ish if there were no home key. So id suspect if they went this route itd be a design change for both

Looks better than the III, but still very ugly and plasticky. Me no likey.

If that’s it, then they might as well not bother making the Note anymore.

will S4 has Youm display? I will be so excited if it does!!

Can you imagine how big the Galaxy V will be?!?!?

Doubt it. Doesn’t look like anything Samsung would design. Looks more like an LG design to me. I highly doubt Sammy will omit the home button. I for one would be annoyed if they did.

I’ve found the home button useful for coming out of sleep but not so good for multitasking.

huh? I’m pretty sure this image was going around a bit back as well saying it was the next what ever phone from Samsung.