Home Mobiles Is this the Motorola X Phone? 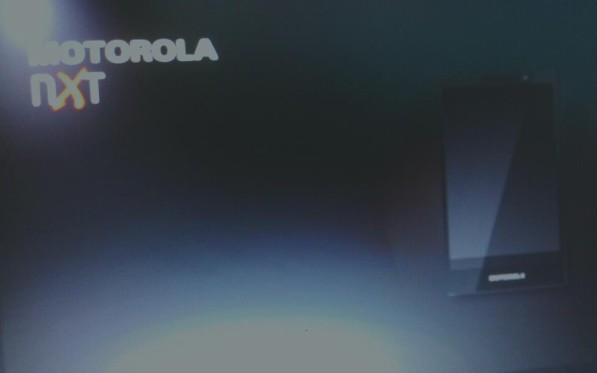 Update: No, this isn’t the Motorola X Phone. Looks like a false render. I mean really, who would have guessed — the image was really poor quality, and the specs seemed a little unreal. Sorry folks, we’re as excited about the X Phone as you are, but this isn’t it.

It must be leak season. Seemingly spurred on by Samsung leaking all sorts of things about the upcoming Galaxy S IV, Motorola might be jumping on the bandwagon releasing some details about the rumoured X Phone, together with a very blurry image to boot.

The X Phone was rumoured to be the first device to come out of Motorola under Google’s supervision, unlike prior devices — like the RAZR M or RAZR HD — which were already in production at the time of Google’s acquisition of Motorola’s mobile business. Essentially, we understand that the X Phone will be more akin to a Nexus-like device than previous Motorola offerings, perhaps capable of competing with the HTC One or Samsung Galaxy S IV.

According to what we’ve seen, it looks like the Motorola X Phone will have an Nvidia Tegra 4i processor, which is not the same as the Tegra 4. The Tegra 4i, announced last month, is Nvidia’s first chipset that integrates an LTE modem, which is a good thing, but the CPU and CPU performance are not quite on par with the Tegra 4. For those that like details, the Tegra 4 is based on the latest in ARM architecture, the Cortex A15, while the Tegra 4i is based on the Cortex A9 which was popular in many of 2012’s phones.

CPU aside, the Motorola X Phone is rumoured to have a 4.7-inch 1080p Full HD touch screen (just like a number of other devices coming out this year), which puts it on par with the HTC One, but a bit smaller than the rumoured 4.99″ screen on the Galaxy S IV. Camera-wise, we’re looking at a 16mp rear camera, and a 5mp front camera.

In terms of physical size, we’re looking at a device that’s 131.2mm x 66.6mm x 7.9mm, so its going to be a very thin phone. With these dimensions, it looks like it will be more compact than the HTC One. Following the design of the RAZR M, it looks like the X Phone will have some razor-thin bezels to fit such a screen in such a svelte device.

We’re taking these specifications with a fairly large grain of salt; they’re anonymously sourced, and could well be made up. However, it wouldn’t surprise me if these were actually the real deal.