On Wednesday morning, LG invited members of the Australian media to Sydney’s Museum of Contemporary Art for the launch of their new flagship device, the Optimus G.

Take a second and read that back again – we’ve only just seen the Australian launch of the device that begat the Google Nexus 4, which was itself launched in overseas markets in September 2012.

We were treated to some light breakfast catering – in this case, some breakfast food and your standard tea/coffee – before being ushered into a small theatre for a presentation from representatives of LG, Qualcomm, and Telstra. 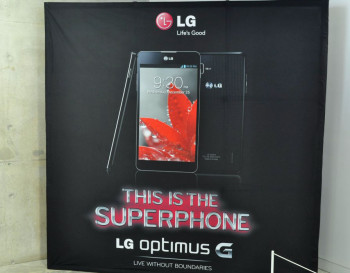 LG’s using the term Superphone to describe the Optimus G, and is going to great lengths to position their brand in consumers’ minds as a player in the high-end, post-paid device market – a market in which it hasn’t really been visible in Australia for a long time.

The Optimus G’s hardware isn’t much different than that seen in Google’s other “superphone”, the Nexus 4. This shouldn’t be a surprise – it’s basically got the same internals, but the G ticks the boxes the Nexus 4 doesn’t. It features LTE connectivity, a 13 megapixel rear camera and comes with 32 GB of internal storage – although it’s also missing a Micro SD slot for storage expansion. The shape is a lot less curvy than the Nexus 4, and there’s a different pattern etched under the glass back.

While the screen is the same model seen in the Nexus 4, LG has taken the time to calibrate the LCD display and runs it with a different colour temperature than Google’s device – personally, I prefer LG’s approach. The screen on the Optimus G also feels bigger because it’s not constantly displaying Android’s soft keys on the bottom.

It’s hard to find a fault with the hardware specs, we just wish they’d brought us the hardware sooner. LG is now competing against 2013’s flagships – the Xperia Z, HTC One and the looming Galaxy S IV – with a phone that lead the pack in September 2012. It did seem that LG was going out of its way not to talk about the Nexus 4, too. There were also some questionable slides on display, with LG obviously playing on its underdog status at this end of the market.

Andrew Volard from Telstra lead us through some details of Telstra’s 4G network as it stands today, and spoke about how much consumers enjoy the benefits of the speed and coverage it provides. A lot of these details seemed familiar, echoing the information we got at the Motorola RAZR launch last October.

The big news for prospective Optimus G owners is that the device is free on Telstra’s $60 plan, with a 2 year contract. You can also purchase it outright for $624, a decent price given the age of the handset.

As has become the norm for Android flagship device launches, much attention was paid to the software customisations LG has made over the standard Android interface. These include customisations to the camera software and features – something we’ve seen HTC do a lot in recent years – as well as useful additions like QuickMemo, QSlide and Dual Screen. We’re reaching a point in Android’s evolution where manufacturer customisations shouldn’t be instantly dismissed in favour of stock Android – each of these features actually provide something you can’t do with a Nexus device.

The Optimus G is running Android 4.1.2 – it’s Jelly Bean, although it’s clearly not the latest version. When pressed about Android 4.2, we were told that LG is focusing on Key Lime Pie, and that they didn’t think 4.2 brought features to the table that warranted their time reintegrating their customisations with the system and running the extensive tests that this requires. LG wouldn’t discuss whether or not they’re already working with Key Lime Pie, although as the company is a Nexus partner we can draw our own conclusions.

Much was made of the device’s ability to output to an external display both wirelessly (Miracast), and over a wired connection – the demo area was lined with Miracast-compatible TVs. Being able to output what you’re seeing on a device’s screen to an external device is actually really useful when doing product demonstrations. 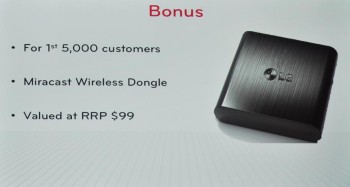 LG is packing in a Miracast TV adapter dongle with the first 5,000 Optimus G units sold in Australia. The device (which we’ve previously seen demonstrated) carries a recommended retail price of AU $99, and LG doesn’t seem to want to comment on whether they’ll sell the adapter at retail beyond the pack-in units shipping with the devices.

After the presentations were over and done with, we were shown into the demo area where LG staff guided us through four demo stations showing off the main software features of the device.

At the first station we were introduced to the basics of Miracast and shown how the device can mirror its display on screen, or use a “dual screen” configuration – allowing you to output video to the external display device, but do something else on your screen. This is useful for presentations – you can drive a PowerPoint presentation from your phone, but display notes for the presenter on the phone’s screen.

We were then shown out to the balcony for a presentation about QuickMemo. It allows you to scribble memos on your phone’s screen as an overlay, so you can write messages, annotate screenshots or just draw on a virtual post-it note. LG’s so confident in QuickMemo that the Optimus G has a dedicated button to activate it, but you can also start it from an icon in the notification shade. We were also treated to a quick demonstration of some camera features – the now-ubiquitous HDR mode, and a novel function named Cheese Shutter which takes the photo when it hears the word “cheese” (it’s also localised and responds to common phrases from other countries, like “kimchi” for Korea). The third demo got the crowd talking, as an LG representative used the phone’s Time Catch feature to get a photo of a “missing moment” – model striking a pose in a doorway, then moving away before the shutter was pressed. The device constantly shoots full resolution photos, storing them in memory and allows you to look back in time up to 2 seconds before you pressed the shutter. The feature was demonstrated live with a moving model – always a difficult subject to capture – to murmurs of approval from the crowd. While LG’s representatives would like us to think this is a unique feature, we saw similar functionality on the HTC One – unfortunately, emphasising how late the Optimus G is in the Australian market.

The final demo was QSlide, an interesting user interface element that allows you to play videos, browse the internet, take memos, view your calendar or use an onscreen calculator in draggable, resizeable windows with adjustable opacity. The QSlide windows are always visible on top of whatever else you’re doing on the device, but they don’t capture your touch events unless they’re completely opaque. It’s a different form of multitasking to what we’re used to seeing on a mobile device, more akin to a desktop. Unfortunately, the 5 QSlide apps are the beginning and end of this functionality – LG doesn’t seem interested in opening it up to widgets or other applications via an API of some kind.

All the demos were performed with the Optimus G devices connected to large screen TVs nearby, and I appreciated being able to see things like the camera interface on a big screen instead of fighting off others to get into position to squint at the screen. I also took the time to see if we were able to connect my Nexus 4 to one of the TVs (it worked).

Despite the quality evident in the Optimus G, it’s difficult to muster enthusiasm for the device simply due to its late launch. Rumours are already circulating about possible specs for the Optimus G 2 (and/or Optimus G Pro), and the temptation is there to overlook the device in favour of one of the newer flagship phones from other manufacturers. It’s hard to blame anyone who succumbs to such temptation in the shadow of the Galaxy S IV.

” When pressed about Android 4.2, we were told that LG is focusing on Key Lime Pie, and that they didn’t think 4.2 brought features to the table that warranted their time”

In other words, it launches with an out if date version of Android & dont ever expect timely OS updates. Your puny $624.00 means nothing to LG. Want an OS update? Throw another $700.00 at their feet for yet another handset.

Abandoned at launch..
How very Android..