Samsung has wasted no time in preparing accessories for their new pride and joy. The Galaxy S 4 microsite reveals a wide range of companions for their new flagship device, from a variety of covers to a gamepad and health-related accessories.

The canned response that PC World received upon contacting Samsung for more information was as follows:

Here are the accessories listed on the website, in rough order of how interesting I find them:

I’m excited about this because it represents a big step towards the Qi wireless charging standard going mainstream. Although the word on the street is that “it’s up to the carrier to offer [wireless charging]”, it can only be a good thing that the biggest name in Android is rocking Qi. 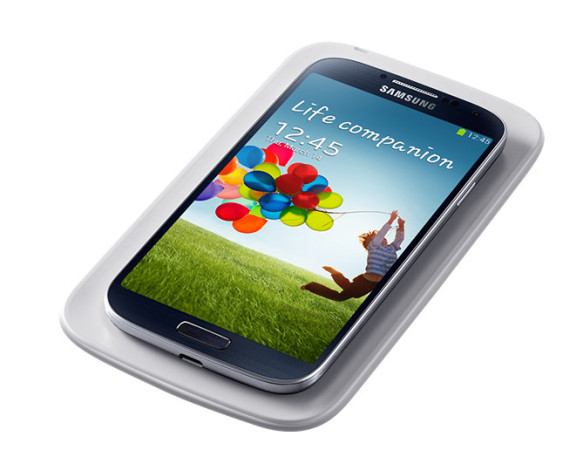 A Bluetooth game pad built specially for the Galaxy S 4, though it appears to support any phone with a screen size of 4″ – 6.3″. It features one touch Bluetooth pairing using NFC Tectiles, and comes with all the controls that you’d expect from a game pad including a D-pad, dual analog sticks, shoulder keys and four action buttons. In an age where many manufacturers are moving towards sealed, non-replaceable batteries, Samsung has stuck to its guns and opted for a removable cover, meaning that users can carry around a spare battery. Interestingly enough, Samsung has realised that their removable battery offers them an advantage over their competitors, and pointed it out as as a feature during this morning’s keynote in New York. The kit will presumably feature an extended battery which can be charged separately from the phone. 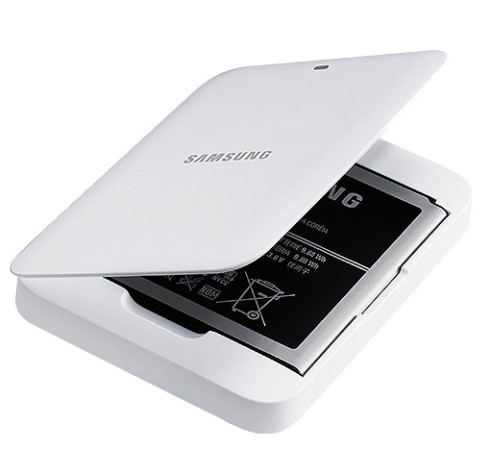 A cover with a window built into the top, which allows users to see notifications and indicators without having to open the cover. The cover also unlocks and locks the phone as it is opened and closed. Hipster tip: use the black cover on your ‘Frost White’ Galaxy S 4 and the white cover on the ‘Black Mist’ model. The poor man’s version of the S View Cover

The clumsy man’s version of the Flip Cover. So uninspired that they didn’t even bother appending an ‘S’ or a ‘+’ to the name. A Bluetooth fitness band designed to communicate with the ‘S Health’ app. It records steps taken, calories burned and distance traveled, as well as checking your ‘Sleep Efficiency’ by measuring how much you move while you sleep. Apparently it’s waterproof up to 10 metres. Similar to the S Band, but designed to work with the ‘Running Mate’ app and monitor your heart rate. I’m surprised they didn’t call it the S-Cale. Basically it’s a set of scalse that sends its measurements to the Galaxy S 4 via Bluetooth It supports up to 7 users and works with the S-Health app (which hopefully comes with password protection). “Premium Hi-Fi sound experience” featuring 2 speakers in each headphone (woofer and twitter). It remains to be seen whether these will ship with the device or be sold separately (most likely the latter). 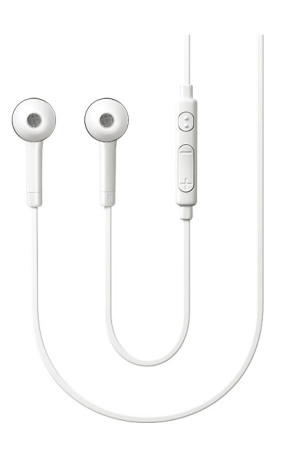 Which of these accessories are you most interested in? Let us know in the comments!

There is a Samsung store now in Sydney, so hopefully that means at least they will have the focus on accessories!

Good point. Hopefully this means we won’t get gouged for postage costs and have to wait months for accessories.

The S View Cover is very nice. Would there be one for S3?

The S View Cover, apart from being a side flap, is a BTTF concept being flogged as an accessory in stead of being supplied as stock. Flip cover with window was fitted as standard on the old Palm m100 series released in August 2000.

It’s not really a poor man or clumsy mans case. The protective case is actually really good, I have a third party one on my S3 and it protects more than a $40 one that only protects the back and sides.

Yeah, I was just having a laugh because there’s really not much to say about a case. 🙂

I’m a fan of protective cases too, and I hope the official ones come to Australia.

Ah Okay mate, I may have taken it the wrong way 🙂

I’m wondering whether the bigger battery for the. S4 will fit the S3?

Good question. My uneducated guess would be no, but you never know!

I’m sure an enterprising third party will do it now.

I can exclusively reveal none of them will be available at launch in Australia.

If we see more than just the flip cover I’ll be shocked. Last year I think the spare batteries and the flip cover were the only things that ever got to Aus. I want the wireless charging more than any other crap

Yeah, I was ranting on Twitter the other day that the worst thing about being an Australian Nexus fan is the accessory situation.

Hopefully the situation will be better because it’s a Galaxy. Fingers crossed.

Hopefully it’ll have the best of both worlds: specialised support for certain games and the ability to map the gamepad buttons like a regular input method.

We can only hope they do a better job this time.

True, but ideally we shouldn’t need to.