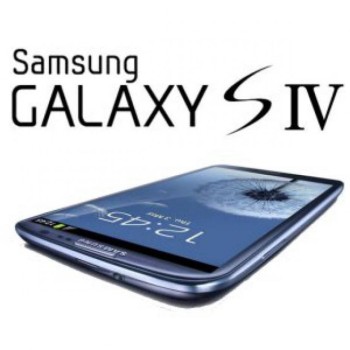 The Samsung machine is at it again.  Creating more news for all of us to inhale, digest, or ignore depending on your preference.  Overnight several little snippets were released, however none by by Samsung themselves.

Qualcomm on the Galaxy S4 camera

First cab of the rank is a retraction by Qualcomm that the S4‘s rear camera does not in fact capture 1080p video at 60fps.  In a blog post by Qualcomm about the Galaxy S4 carrying onboard the Snapdragon 600 processors in some countries they stated as such as seen below in a screen capture of the blog post.  While most people were very sceptical about this feature, especially considering Samsung made no mention of it at all, most still weren’t sure either way.  Qualcomm have told Phone Arena that:

The person writing the blog post made a typo, writing 60fps instead of 30fps, and getting the whole planet worked up about it in the process. It would have been something to see the first smartphone camera capable of recording 60fps video in 1080p (and it would have been even more interesting to find out why Samsung wasn’t promoting the feature,) but I guess we’ll just have to wait for it for a while longer. 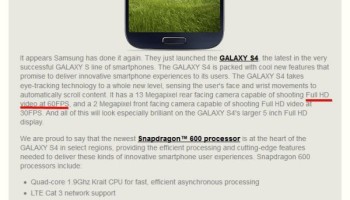 Is anyone really concerned by this?  How many of you really need to capture 1080p video at 60fps on their phone?

Next snippet was that yes the Exynos 5 Octa does support all 20 bands of LTE.  Speculation was rife that the reason that the Galaxy S4 came with the Snapdragon 600 in most regions was because of the LTE factor.  Turns out that the Exynos 5 Octa has not been in production long enough for enough of them to be ready to supply the millions of Galaxy S4s that Samsung expect to sell.

The Exynos 5 Octa processor will only began production in Q2 this year and Samsung themselves have  been reported as stating that 70% of the first 10 million (yes I did just say 10 million) Galaxy S4s will house the Qualcomm processor.  Good news for some who were hoping to eventually get an S4 with an Exynos processor to run on Australian LTE bands — keep in mind though that the modem or radio of the device must also support the LTE bands you require.  Personally I would prefer the Snapdragon 600 version anyway as Cyanogen himself has said he will most likely pick one up and is confident that CM10.1 will run on it flawlessly.  Samsung does not open source the drivers for the Exynos processors, which makes running AOSP roms on these versions difficult. 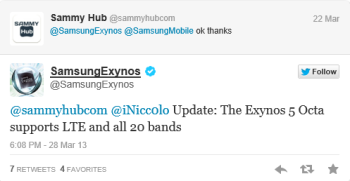 Last, but not least, in my opinion Sammobile has leaked an image of the wireless charging kit for the S4.  Coming from a Nexus 4 stance I can tell you that wireless charging is amazing, easy and extremely convenient.  Of course, it’s not free and the price has been stated to come out at around $50, which I am assuming is US dollars.  The kit consists of a back cover with the Qi charging hardware as well as the charging plate itself.  I would recommend people pick them up and try them out as the convenience cannot be overstated. 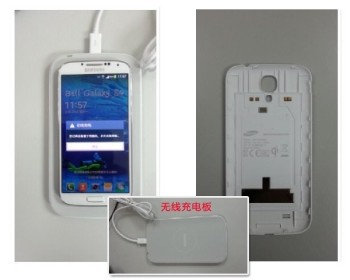 Does any of this news affect your opinion of the Samsung Galaxy S4?  Will you still be getting one?  Will you be holding out for an Exynos 5 Octa processor?

Saw this info, not from a tech site but nonetheless I’m sure we all hope to play out as such, ‘Some regions will get the quad-core version of the Galaxy S4, but a Samsung representative at the launch event confirmed that Australia would be getting the eight-core version.’
Read more: http://www.smh.com.au/digital-life/hometech/samsung-galaxy-s4-v-the-rest-20130327-2gt7q.html#ixzz2OxpV0UkB

I want want WANT the exynos 5 but I do want better custom rom ie cm10.1 support that I know it CAN’T get. A big dilemma. I know on the s3 cm10.1 could have been magical… But no.

$50 or A$60 isn’t much for wireless charging. I would get that if it’s readily available.

yes, we know the Qualcomm snapdragon 600 supports the Aussie LTE bands due to that being the one released here, but according to this tweet the Exynos 5 Octa supports every possible LTE band as well. Whether the phone can use that band without a specific modem I am not sure. I do not know enough about LTE radios etc to answer that accurately. We will be able to see once they are released I am sure.

just not* been in production long enough?

Thanks. Fixed. Teach me to write something 20 minutes before leaving for 3 days away.

I”ll be picking a Qualcomm equipped unit so as soon as i get sick of crapwizz it’s CM 10.1 time.

From what I understand with the S3/exynos, the S4 exynos version will still get cm10 or aosp or some other form of custom roms, it will just not be able to use all of the features of the chipset due to documentation being unnavailable..

its more than that missing.

you often lose out on cameras and bluetooth, which are pretty important to me.