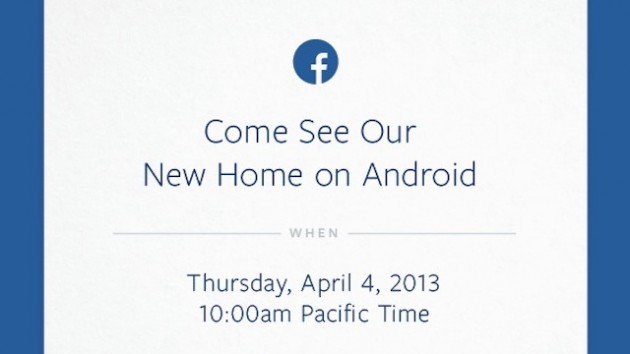 Facebook recently sent out invites to their press event that is taking place on April 4, which has set the rumour mill ablaze once more. Initially, folks were going crazy over what was said to be the mythical ‘Facebook phone’, but after actually thinking about it, it seems the internet’s consensus is that Facebook have created a replacement launcher that is said to place Facebook front and centre on your device (much like HTC’s BlinkFeed). This actually makes a lot more sense, because really, who would buy a phone because it has Facebook? Instead, Facebook offer all Android users the opportunity to have the social network become a much more intimate part of their lives, with status updates adorning their home page constantly, just begging to be interacted with.

As someone who doesn’t really use Facebook often, I doubt that a Facebook-centric launcher would appeal to me at all. But I’m probably not their target audience. I know a lot of Facebook-obsessed people, who will probably love the idea (if it happens to pan out come Thursday). According to the Wall Street Journal, Facebook have been in talks with various OEMs to try to make Facebook more embedded in the custom skins that manufacturers offer, and so a custom launcher, or at least a decent widget, is a good place to start. As usual, when rumours of a Facebook phone surface, HTC are indicted as a partner, and maybe Blinkfeed is partly as a result of this alleged collaboration. Whatever Facebook have planned, it must be big, and we will all find out later in the week.

It will be interesting to see what this phone look like but people needs to be aware that HTC does not have a good reputation for looking after their products (ie providing constant software upgrades) once the products leaves their factory floor.

Didn’t you read the article? The general consensus is that there will be no Facebook phone.

In matter of fact, I didn’t. Just skimmed it and made up my own assumption as I usually do. 😉