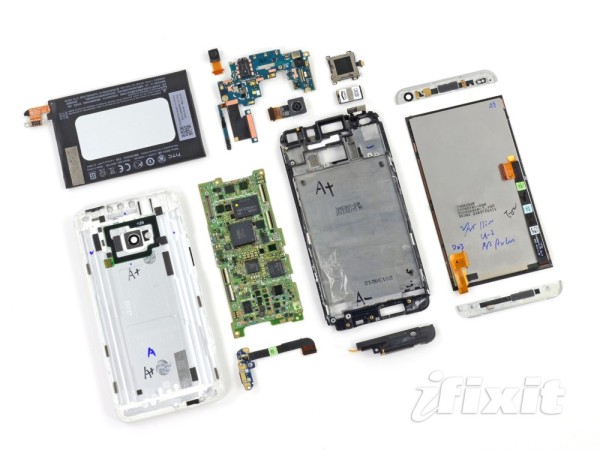 If you’re looking for a phone that you can take apart and put back together, do not buy the HTC One. HTC’s latest smartphone has gotten a reputation for its solid construction and beautiful industrial design, but according to iFixit, it is ‘nearly impossible’ to perform simple repairs such as replacing a damaged screen.

Apparently, the display assembly cannot be accessed without removing the back cover and all of the phone’s internals, the battery is buried beneath the motherboard and is glued to the phone’s midframe. There is also copper shielding on many components, reassembly of which has been described as ‘like trying to straighten out aluminum foil once it’s been crinkled’. Also, there are no screws on the outside of the device at all, so getting inside is all suction cups and spudgers. Sounds super fun!

The One’s reparability score of 1 out of 10 (10 being the easiest to repair) places it alongside the Microsoft Surface Pro, the only two devices to date to receive such low scores, but both very beautiful pieces of hardware. Conversely though, Apple’s iPhone 5 received a reparability score of 7/10, largely because of the fact that it comes apart screen-first.

Is it important for you how easily a phone comes apart, or would you rather a device with solid construction that hopefully won’t need to be repaired? Let us know in the comments.

The HTC one x does not work to well when you put through the washing machine either. Might try a sony z

If it means they can make them thinner than i dont mind too much. The thinner the better imo.

I’d rather more battery life. Extremely thin phones aren’t for the better, unlike what Apple may lead you to believe

But the iPhone 5 with a meager ~1400 mah batter easily outlasts many Android phones (outside of the ones with a whopping 3000+ mah battery).

They managed to get thin and long lasting battery right, why can’t Android OEM’s?

Oh the iPhone 5 battery is hardly as miraculous as you think.. use it even minimally and it goes flat in a couple of hours flat. It’s only if you don’t use it and have most things switched off that it lasts that long..

Not a fanboy
Reply to  Chris

Sorry but you are wrong – I have gone to an iPhone 5 after years with Android devices (Samsung/HTC/Sony) and it beats all Android phones apart from the Note 2 (will use this is a comparison with 4G). Was going to grab the S4 when it comes out but unless it’s better than the S3 4G (horrible battery life with 4G on) then I’ll be staying with Crapple it seems

Sean Royce
Reply to  Not a fanboy

I will agree, Apple does an excellent job at optimizing the hardware together with the software. They aren’t bad phones. Just over rated over hyped Facebook machines.

I agree. I’d take a slightly fatter phone with solid battery life over a super-thin one that can’t make it to 5pm any day.

Nope! I won’t be the one pulling it apart! 🙂