While Facebook’s “new home on Android” will be revealed on April 4 (US time), evleaks has dropped an image purported to be an as-yet-unseen HTC handset, believed to be “the Facebook phone”.

Here’s the first look at the device: 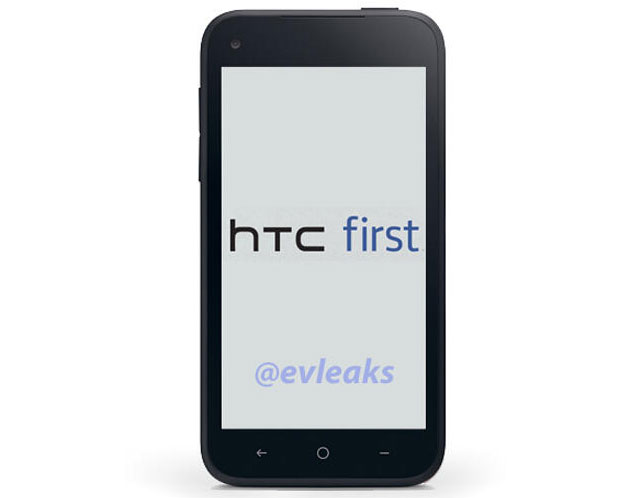 What was initially codenamed “Myst” has now been outed as the HTC First. We’re likely to see full details at Facebook’s event, but the device is said to have a 4.3 inch 720p display, a 1.5 GHz dual-core Snapdragon chip, a 5MP rear camera and 1.6MP front camera, 16 GB onboard storage and 1 GB RAM.

For our money it looks like a fairly generic black slab. Comparisons have been drawn to the Motorola Defy+ and pretty much every HTC phone of yesteryear. Notably, the “HTC first” logo appears to have been plastered across the screen, possibly indicating a late change or late decision on the branding – the fonts don’t match up, and the “first” is ever so slightly larger than the HTC logo. It could be a rush job, a badly-done Photoshop, or just plain fake.

The specs seem rather middle-of-the-road, but if accurate could help the device reach a good price point in a currently underserved section of the market. There will no doubt be more to follow in the next couple of days.

What do you think of the leaked device’s design and rumoured specs? Would you buy a phone simply because it’s integrated with Facebook? Let us know in the comments!

Source: evLeaks.
Via: Android and Me.

Is this another april fools joke .. seriously?

How exactly is it “worth looking at”?

or an “underserved section of the market”?
Most droids released in the past 2 years are equivalent to this and are plenty cheap (S2’s are $269 at Kogan, or on various $29 plans.)