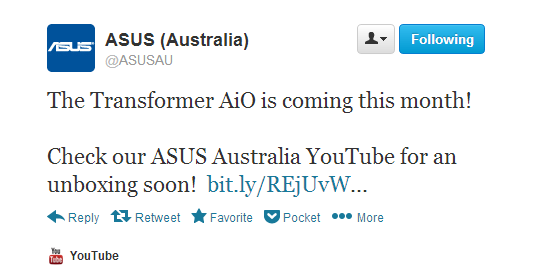 Asus Australia announced via their twitter feed today that the Transformer All in One is coming to Australia this month. The powerful device offers desktop style, Windows 8 performance as well as the ability to detach the 18.4 screen to use as an LED backlit tablet which can switch between Windows 8 and Android 4.1 at the push of a button.

The AIO offers a new, intriguing paradigm with it’s ability to run both a full size desktop operating system, as well as a mobile Operating system independently on compatible hardware. When docked the system runs Windows 8, however when you undock the screen, it displays Android but with the ability to wirelessly connect to your Windows 8 system to access your files or run MS Office applications. The dock can still be used while the screen is being used as a tablet by use of an additional HDMI out port on the dock.

The hardware specs for both sides of the product are nothing to be sneezed at either, both the Android and Windows 8 side of things will share the 18.4″ IPS LED Backlit display which offers a full HD 1920×1080 resolution.
The Desktop will run :

The Tablet will run :

Don’t be under any illusions that this is a PC and portable tablet that can take care of your every day work on the PC and then allow you to take the tablet to work with you. Weighing in at a monstrous 2.4kg, the setup is more firmly aimed as a permenant feature in your home, as a home entertainment hub rather than an everyday living device. The whole setup will cost around $1999 in Australia and Asus expect to launch the unit in mid-April.

Does the Transformer AiO interest you, or will you give it a big miss? Let us know in the comments below.

Absolutely it interests me, but I feel sorry for any Australian who pays $1999 – that’s $700 more than they are charging in the US. If I buy this I will definitely be using ShipItTo. It’s important to let people know about the options that are there so they don’t get ripped off.